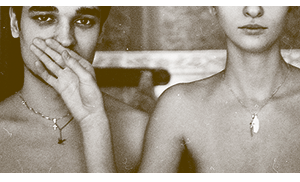 When you’re chronically ill, healthy people can put you on the defensive. It’s not because they’re healthy but because they’re awkward. They grab your hand guiltily and say, “It’s okay. Everything’ll be all right.” They think they’re being empathic but they’re not. They’re just scared to admit that everything will not be all right.

It’s more like an attack of narcissism. For the healthy, happy and successful, suffering people are an uncomfortable reminder that none of us can expect to feel good or safe for long. Modern culture glorifies the ancient delusion that human beings are destined for happiness. As if evolution has an agenda…. It’s nonsense, but it’s ingrained.

I always felt bad for the afflicted, but that wasn’t empathy, which joins us to others; it was pity, which distances us from them. Really—how can a winner truly console a loser? After years of trying and failing at empathy, living with my wife Caroline and her multiple sclerosis taught me this upsetting realization and moved me forward.

Empathy isn’t just a gooey feeling. It’s an acquired skill, and it takes a light touch. At first I was horrified by my insincerity, filled with self-disgust. I pledged to never be that way again. That didn’t help at all. No motivator is more useless than neurotic guilt.

What helps is mindfulness, but only if it’s intelligent. An astonishing number of meditators believe that watching the breath for hours will magically make them more insightful and loving. They’re dreaming. If you need to change your motives, be mindful of your motives, not your breath.

The idea that life must have a point is a fiction;
the sense that it’s urgent is a neurosis.

Then there’s the paralyzing double bind of contemplating how you should behave. Proper mindfulness focuses simply and unambitiously on how you are behaving. Next time you feel the urge to declare that everything will be all right, drill down through your stack of motives. Are you saying it for the other’s benefit, or for your own?

We think we’re giving them hope, but hope’s a virtue only if it’s realistic. Besides, what’s at work here is not hope at all. It’s fear. When you subconsciously believe that happiness and success are everyone’s birthright, the possibility that life won’t necessarily serve us is too awful to bear. It’s irrational and rather pathetic, but the young actually hope (and almost believe) they won’t get old, the healthy that they won’t fall sick, and the rich that they won’t lose everything. The incontrovertible fact that everyone ages, gets sick and dies has negligible impact on the way we live.

By accepting your own dilemma you recognize everyone’s

We can change, but not by sheer willpower. Mindfulness steps us away from consoling rationalizations to quietly observe what we’re actually doing, feeling and thinking. It’s not guided by hope, but it’s not hopeless. It’s fearless.

The idea that life must have a point is a fiction; the sense that it’s urgent is a neurosis.  That doesn’t mean nothing counts. We know from experience that we find deep purpose in touching and being touched. We need not just to feel but to feel with others (which is what compassion means). Deep down, we all prize empathy. Once you get past your rationalizations it’s self-evident.

To have lasting results, mindfulness must turn you back to the realities you turn away from. By accepting your own dilemma you recognize everyone’s. Then real empathy simply happens. Once you get over the initial shock it’s strangely consoling. To face fear is to negate it. You see that your condition doesn’t define you. Empathy frees you to be a force of nature, not limited by your fears but empowered by an open heart.

11 thoughts on “When Empathy is Dumb”