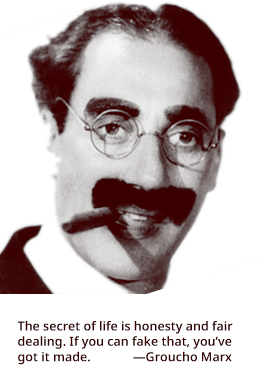 When little Philip was told he was stupid, he believed it. That’s how it is with children: they take abuse and think they deserve it. They also deny it, burying that misinformation as deeply as they can. There’s an awful lot of angry grown-ups out there.

Some of them vent their spleen all over the blogosphere. For them, it’s awash in effing idiots, morons, retards, Taliban-lovers and good old-fashioned bastards. Behind their anonymity, they feel no pressure to obey the social conventions they conform to when face-to-face. So much for integrity.

The fuel of this cycle is denial, a stubborn habit that passes on the toxicity from one generation to the next. It’s possible to break it, but first they have to acknowledge the awful power they wield. That’s hard on the self-esteem.

There’s honor among thieves, but no integrity in ignorance.

I hear about such people all the time in my one-on-one coaching sessions. There are so many stories about abusive parents, spouses, siblings, bosses, co-workers — even gurus. Abusers are often so forceful that my clients not only lose the will to fight back, they lose faith in themselves. It’s horrible.

As Philip said, “I used to be angry but I’m not any more.”

I love the pause that follows.

It’s not easy to question yourself and come up short. We’re advised these days to feel good about ourselves at all costs and in all situations, but how honest is that? While self-doubt can be destabilizing, fake certainty’s worse. New-age saints keep their negativity in, but something’s bubbling under the surface and they’re not willing to face it. The solution is a bit of constructive negative thinking: serious doubt forces you to look deeper and be more honest.

Once you’re willing to doubt yourself, change is possible

Being angry and choosing not to react is your right; pretending you’re not angry when you are is wrong. Only by paying close attention to your motives can you avoid confounding the two.

We wish to not offend, to keep the peace, to not stand out. It sounds neighborly and humble, but it’s not. It’s just self-disrespect.

But we don’t want to see ourselves that way, and so we spin the facts. It’s weird how we choose to believe our own lies, how we actually think we get away with it. Nothing’s more complicated than the image we project on to our history, habits and proclivities and that we call, ‘me.’ That’s why “know thyself” is the most basic of all Greek proverbs and the foundation of all useful philosophy.

Projecting oneself as restrained and civilized may be a guide to refined behavior and self-improvement, but it can also become a show. That’s when Philip said, sincerely but dishonestly, “I’m not angry.”

Knowing yourself is not just hard and confusing. It’s also extraordinary and courageous. It requires honesty not just about facts but about the way you resolve your feelings. Once you’re willing to doubt yourself, change is possible. It’s only a first step, and yet it’s the greatest.