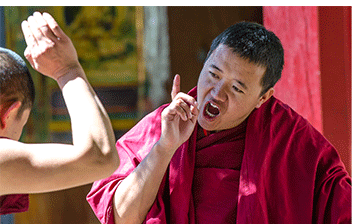 Dharma, karma, samsara and nirvana may have been absorbed into the English language, but if you become a Buddhist you’ll learn their real meaning. To fully grasp them you also need to understand dukkha, anatta, tanya and several thousand other terms. It’s difficult for a beginner, but to the extent that you get it, whether in an Asian or a European language, the more comfortable you’ll feel.

The question is whether that comfort is actually a good thing. After all, to grasp dharma is to grasp the matter of life itself, not just esoteric theory. Sadly, the study of Buddhism can seriously distract you from dharma. Worse still, it can leave you with a false sense of accomplishment.

This paradox leads some Buddhists to be reject all scholarship, and decide that the only thing that counts is sitting in strenuous meditation. They’re stuck in the opposite extreme. As my old teacher Gen Rabten used to say, if you don’t study, what are you going to meditate on?

Scholars sometimes forget that dharma is just the practice of being.

But he was a Gelugpa, from the Tibetan sect that makes a whole lifestyle of out of scholarship. Like medieval Christian monks, dusty old rabbis and bookish mullahs, Buddhist scholars too sometimes become obsessed with the minutiae of the scriptures and the grandness of their metaphysics. Not infrequently, they forget that dharma is just the practice of being. It’s frighteningly simple.

Simplicity scares those who revel in their intellect and desperately need to understand. ‘Living simply’ basically means seeing and thinking clearly. It’s not easy. What is easy is letting opinions and defensiveness clutter the mind and obscure its natural clarity.

Scholarship easily becomes a matter of self-satisfaction. That’s okay if you can let go, but those things in which we invest the most time and effort are precisely the ones we cling to most determinedly. The point of dharma is to cultivate a new way of being that’s light on opinion and is distinctly undefensive.

Buddhist scholars can be intellectual engineers, so comfortable in the mastery of their subject that they derive their entire emotional satisfaction from its exercise. That’s not so great. Engineers often flee the emotional uncertainty of intimacy by securing themselves with the nuts and bolts of their trade. Buddhists who’ve mastered the scriptures, or even the lonely technology of meditative states (jhānas), may well be on the run from people. Then, those skills count for very little.

When you feel that others don’t get the dharma and you do, take a moment to look at how you are, not just at the ideas and logic that keep you safely at arm’s length. Perhaps your words put you at odds with each other even when your understanding doesn’t. If you read or hear someone misusing the words dharma or nirvana, bear in mind that that’s not really understanding — it’s just an opinion — and ask yourself what’s important.

Isn’t it all about the startling mystery of being alive and conscious, here and now, for absolutely no particular reason? And isn’t it even sweeter when you can share that insight in the silence that falls where words fail?

1 thought on “The Seductions of Scholarship”