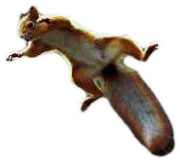 It was warm today—a full, balmy six degrees Celsius—and the squirrels were out in the melting snow as I drove up Côte-Saint-Charles. In fact, one of them almost dashed under the wheels of my car—after which I was much more attentive. I like squirrels. More to the point, I hate running them over; but there’s no way around it—when it comes to crossing the road, they don’t come any dumber.

As my driving became more attentive, I got to thinking. Attention is the key to mindfulness; and ‘mindfulness,’ like ‘meditation,’ is becoming ridiculously misunderstood. As I watched out for squirrels I realized that it came at a cost—my attention to other things on the road, like fallen branches, pedestrians and other vehicles. I couldn’t be equally attentive to everything. The more I tried to look, the more I realized just how much I had to choose. This applies not just on Côte-Saint-Charles on a balmy winter’s day, but in all situations. I recalled the Buddha’s instruction on mindfulness—it’s very specific.

The popular take on mindfulness has become, “being in the moment,” which sounds really cool but doesn’t by itself mean a damn thing. The point is that ‘attentiveness’ is transitive—you’re attentive (or not) of something. The sort of practice that leads to awakening doesn’t just let go of annoying thoughts and groove on sensory perception, but actually attends to the three marks of existence: inconstancy, stress and emptiness. This is a lot more substantial, and a lot less airy-fairy. It’s not what people want to hear—which is perhaps why it disables wishful thinking so effectively.

For meditators who seek value for their investment of time and effort, mindfulness brings a) insight into the nature of existence, and b) a letting go of the illusions that keep us committed to cyclic existence. By seeing every breath, every thought, feeling and sense perception as inconstant, stressful and empty, we develop an intuitive sense of urgency, and are shifted from the theoretical realm of good ideas to the immanent one of good sense, here and now. It’s how we become happy.