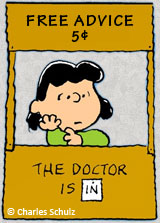 Last weekend I was the fortunate recipient of some critical advice. I wasn’t expecting it, I didn’t ask for it and I really had no idea how to fit it into my life, but it was delivered with the assurance that it came from the heart and would benefit me greatly. It was rather like receiving a Christmas sweater that the giver knows is ‘you,’ but which in fact you wouldn’t be caught dead in. According to the rules of etiquette, however, thanks are in order. Who among us isn’t placed from time to time in this awkward position?

To advise someone effectively, a true benefactor will neither assume that he or she fully knows the recipient’s needs, nor pretend to thoroughly understand his or her predicament — if indeed there is one. This wasn’t the case last week, and I was mystified by the intrusion. Upon enquiring why I’d need such advice, I was accused of being ‘confrontational.’

Am I an ungrateful wretch? Convention insists that one shouldn’t look a gift horse in the mouth, but what of Trojan horses? Too often, they’re a convenient way to offload an intruder’s own unresolved issues in the guise of a free gift.

This particular benefactor isn’t a bad person; his helpful intentions, however, were certainly manipulative. In the reflective lifestyle, Step One of helping out is listening, and its helpmate, asking. Failing to listen means that one’s ‘help’ is little more than interference.

This failing is all too common; it affects not only individuals but also organizations. Look at the way the Catholic Church ‘saved’ heathens around the world, how the Canadian government ‘helped’ first nations peoples, and what the World Bank decides developing states ‘need.’ Today, at last, there is a greater tendency to listen before acting — but only because weaker peoples are finally finding their voice and demanding respect. Having more money or knowledge is no justification for making assumptions about others, let alone presuming to advise them, and yet it remains so common that few people think twice about it. In fact, donors who neither ask nor listen inevitably impinge upon the dignity of others.

As a teacher of mindful reflection, I’ve been asked how one reconciles kindness with discernment; after all, the truth isn’t always palatable. I can only talk from experience — I prefer to be kind, but I’ve learned that until I grasped self-respect, my attempts to respect others were a sham. Through learning to stand up for myself, I’ve discovered that there’s no helping anyone without first listening. This depends on scrutinizing one’s own intentions, which is where the great power of mindful reflection lies.

To understand (‘stand under’) someone’s situation means to put oneself in their shoes, to not simply jump in with one’s own opinions. The advice I received this last weekend came from someone who ‘knew better,’ who understood me so well that listening seemed to that person to be unnecessary. The result was not aid but alienation.

Like anyone I have my challenges, and if someone knows of useful shortcuts, I’m glad to take advantage — but to be useful it has to relate to my life as I experience it, not as they see it. Otherwise, how’s it going to work? Giving isn’t a one-way street; it’s a complex relationship in which two people interact for mutual gain. Generosity is one of the great human qualities, but simply handing out stuff is not generosity. The real thing requires mindful reflection.