…getting what you want makes you happy. That, of course, is the prime tenet of consumerism. 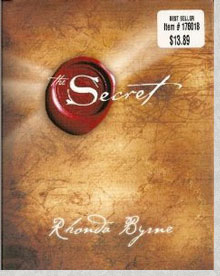 People have been asking me for ages what I think of The Secret. After putting it off for far too long, I recently acquired a copy and now have an opinion; actually, several opinions.

The thing that first grabbed my attention wasn’t the book itself but the way people asked about it — as if they feared expressing their own doubts; didn’t dare question such a successful phenomenon (‘success’ meaning huge sales). It’s a disconcerting fact that many people look over their shoulder to see what others think before voicing an opinion.

The book jumps quickly into the meat of the matter: you get what you wish for; if you don’t, you’re not wishing properly. Surely that’s no secret; it was exactly what I was taught as a child, though instead of ‘wishing,’ it was called ’prayer.’ It tortured me that my prayers weren’t answered. It was obviously my fault; you can’t blame God.

As I renounced the nonsense heaped on me in the name of religion, I got on with life and discovered that in fact one does tend to get what one truly wishes for. My childhood problem had been that I thought that I could just make up wishes as I went along, like ‘lots of money,’ or ‘an intimate relationship with my father,’ or simply, ‘staying out of trouble.’ What I learned is that wishes are never far from dreams; they’re to be discovered, not invented. You get to any destination you truly focus on; assuming you persist, where else would you end up?

Well that’s the meat of the matter, and there’s tons and tons of meat in The Secret. The basic tenet of wishing is repeated in every conceivable way, with quotes from notables like the two Alberts (Einstein and Schweizer). Who am I to contradict them? The trouble is, I know Einstein’s writings, and saw at once that his words were out of context, and considerably shallower than the man himself. In fact, that’s a good adjective for the book: shallow; or, if you insist, meaty — but in a very indigestible way.

If only that were the worst of it. The Secret, which is lauded as a work of spirituality, is founded upon, and never questions, the premise that getting what you want makes you happy. That, of course, is the prime tenet of consumerism. Watch a few TV ads this evening and you’ll see what I mean. Buy Tide and your clean laundry will make you beam just like the pretty lady. Don’t you want her smile, her joy?

The secret of The Secret is that it tells us exactly what we want to hear. Its author Rhonda Byrne is a TV writer and producer who’s tapped lucratively into New-Age positivity (positive thinking, the law of attraction, healing, life force, creative visualization, and personal power). These magical beliefs are thought to be spiritual simply because they’re intangible, but I beg to differ. I find nothing but worldliness in the notions that we don’t need to learn from our screw-ups, that we just have to wish harder, that there’s no need to question the wisdom of what we want and can assume it’s the gateway to joy, that money, power, prestige and success are what life is all about. Where’s the spirituality? Perhaps in recognizing mind as the root of all happiness and sorrow; on that one idea I agree. However, that’s just an idea. With the book, I disagree wholeheartedly. It’s condescending.

Ah! Now I understand why people hesitate to criticize. How could I possibly take issue with all the rest of it? Must be jealousy, or plain pig-headedness. The book’s sold four million copies, so how on earth could so many people be so wrong? How many books have I sold?

Sorry, I still beg to differ. I beg you to differ too, at least a bit. Read it and use it; there are some nuggets in there, but please please come to your own judgement; don’t swallow it hook, line and sinker.

Believers in The Secret might find me a fuddy-duddy in insisting that there’s work to be done in our search for happiness. Sorry, I just don’t have an aversion to hard work, or to hard knocks for that matter. The pursuit of life and its mysterious ups and downs is just what the human mind was made to figure out. Go figure.

2 thoughts on “The Secret”