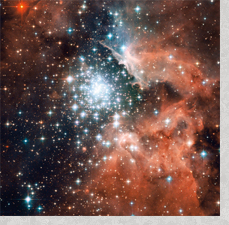 This word drives me nuts. Like ‘God,’ it’s acquired so many shades of meaning—some of them perfectly contradictory—that there’s no way of knowing what goes through someone’s mind when you say it. Nevertheless, it’s used a lot: in the yoga and meditation communities, among natural health enthusiasts—osteopaths, naturopaths, energy workers, vegans, new-agers, there’s a motley crew of people who use ‘the universe’ as a spiritual channel. It needs to be somehow clarified.

Being traditionally spiritual means reaching for something extra-worldly outside oneself to connect with. Call it God, the Universe, the One, the Infinite…. It’s always capitalized; it’s inconceivable, unfathomable, sublime. It’s often called ineffable, meaning it can’t be expressed in language. This doesn’t stop people trying to describe God, sometimes as a white-bearded grandfather in the sky.

This childish image has become an easy target for today’s radical atheists—by which I mean institutional atheists like Christopher Hitchens, Richard Dawkins and Sam Harris; these men are understandably furious at the abuses of organized religion, but about as dogmatic as the religious establishment in their intolerance of anyone contemplating the ineffable. See how stupid believers are, they point out, to fall for such nonsense. That’s quite a logical jump. Those who don’t think of God as a person but more like the underlying logos of the universe are lumped into the same category as fairy-tale believers. What these atheists throw out with the bathwater is awe. Their attacks on religion are partly rational, but they’re often as emotionally charged as the believers they’re attacking. It takes two to argue; the more they have in common, the more fervently they’ll fight.

For those of us not satisfied by reason alone, the problem is the idea of God as a person, because then (s)he has to have a gender and personality and—most complicated of all—ends up with judgement, preferences and a temperament. Enter the God of Abraham who used to incite atrocities and morphed into a loving father. The question of whether God is to be feared or loved has led countless generations of believers into agonized doubt. They used to ‘keep their religion’ for politically correct reasons which apply less and less as faith becomes increasingly divorced from state. Today they’re free to drift, but freedom doesn’t always make life easier. By default and from frustration, many become half-baked, angry ‘atheists.’ Others turn to Hatha Yoga, Buddhism, Taoism or other systems that emphasize personal experience over faith, and demand a fair bit of soul-searching.

Spiritual seekers were always a funny lot. Siddhattha and Jesus, Milarepa and Saint Teresa of Avila were all breakers of tradition and taboo. When everyone in my Mindful Reflection workshops has their eyes closed, I look at the faces of my students and feel at home; I like to think they do too. When I tell them that most people aren’t like us and that we’re the weirdos, they giggle nervously.

I’m more of an agnostic than an atheist. I don’t believe in God, but neither do I disbelieve. This drives some people nuts, but what am I supposed to do—make an arbitrary decision? I have no evidence either way. Much more to the point, I don’t need a superbeing to know that I want to put my every breath to the best possible use, and to recognize that non-violence is the key ethic. No Buddhist institution would accept me as a bona-fide Buddhist any more, but I’m still an avid student of the Buddha; he makes so much sense. I have other sources, too—the Tao Te Ching provides the closest I get to answers, and I still find myself amazed when I open the Bible and find inspiration.

And then there’s a whole other category of ‘spiritual’ people who practice what used to be called the ‘dark arts’ but which have been revived these days as healing, tarot, astrology, dowsing, new-age enlightenment—there’s a veritable crowd of fashionable beliefs. Thinking their lives are led by unseen forces, practitioners say things like, “The universe guided me,” when other people might say, “My, what a coincidence.” What makes them seem spiritual is their belief in the immaterial. In their urgency to explain things they maintain an unorthodox use of reasoning, but it’s still reasoning, and it’s rooted in the very material urge to have right answers. Scientists may not see them as rational, but they have their own form of logic that enables them to explain things, no matter who considers them right or wrong. I used to dabble in it myself; I understand it, and am sometimes sympathetic, but what I today call ‘spiritual’ is quite different.

For me, a spiritual path is one that changes the way we are. It’s proactive and transformational. Simply coming up with an alternative rationale doesn’t actually change anything, whether it makes sense or not. The bigger trouble is that these rationales are so open-ended that they can explain away pretty well anything. I see them most often used as convenient ways to avoid confrontation with reality at its most unpleasant—which is the most effective (perhaps the only) way to fundamentally change your outlook. The practices of Buddhism are designed to put your illusions face to face with reality; only then can you watch them dissolve. For the Buddha, the problem isn’t unpleasantness; it’s our desire to hide it away—whether in plain denial or in obfuscating rationalizations.

The spiritual quest isn’t about finding answers; it’s about letting go of grasping; in particular, grasping at the need to explain everything, as if explanations will make everything better. In order to really let go, you have to be open—to other people and to what they have to say, but most importantly to experience. Reason may be the great human tool, but it’s also the great weaver of illusion. Is your spirituality just another system of rationalization, or is it a practice?