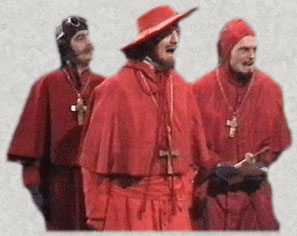 If, in fifteenth century Europe, you were asked to attend The Office, you might well tremble in your boots — even lose control of your bowels — for you’d have been summoned to the Tribunal of the Holy Office of the (Spanish) Inquisition. Today, Quebec businesses are also called to account by The Office. Although it’s not the Spanish Inquisition — it’s the Office québécois de la langue française — it provokes fear, loathing and sometimes mild paranoia among Anglophones.

Last month I received such a summons myself. My Quiet Mind website, which advertises and supports weekly mindful reflection workshops, is in English only. Someone was offended enough by this to contact The Office and complain about me formally. I wasn’t happy about the potential inconvenience and cost of translation, but I didn’t lose a night’s sleep over it — let alone my bowels. Nevertheless, friends, relatives and students gasped in shock. They seemed to anticipate the sort of McCarthyesque injustice that periodically makes headlines in Canada. One imagines tenured bureaucrats with power aplenty, chips on their shoulders and way too much time on their hands.

This is the uniquely Canadian melodrama I was faced with when I landed here in 1982. I’d been studying at the École de français moderne in Lausanne and chose Montreal because it was French-speaking and would enable me to polish my nascent French skills. Despite immigration officials’ assurances that Montreal was sublimely Francophone, however, I found the city so bilingual that most people switched to English as soon as they detected my accent. Opportunities for practice were few and far between.

I was also confronted with the ‘two solitudes’ — willful non-communication, sometimes miscommunication, between French and English-speaking politicians, as if this somehow reflected reality on the streets. The recently elected Parti Québécois government wanted passionately to declare independence from Canada; its supporters were devastated by the defeat of their referendum. Anglophones breathed a sigh of relief but still lay awake at night worrying. The oft-repeated phrase about the county being ‘split apart’ projected an image of continental plates torn asunder. Indépendentists bided their time, rubbing their hands in glee as each big company fled Quebec. The insistence of the Office that business be carried on in French increased costs — from a business point of view, often pointlessly. Small mom and pop businesses closed shop and the commercial face of Montreal changed.

In the press and on television it sounded like war, but I found the Quebecois easy-going, decent and helpful — as most people are in relatively free countries. Admittedly, I was baffled by the notion of ‘protecting’ a language. After all, it can only mean what everyone agrees it to mean, otherwise it’s not much use, is it? Languages change and morph constantly; they have an organic life of their own. How can you legislate them? You might as well try to amend the laws of thermodynamics. I knew this from my own studies of Tibetan and Sanskrit, and even by comparing the language I learned in England with English spoken elsewhere. Each environment lends its own shape and inflections. My favourite version is Indian English — a transplanted, lovingly nurtured and enriched form of Queen Victoria’s vernacular. If I say so myself, I speak it well.

Anyway, this week I had to explain to the Office why I hadn’t conformed to article 52 of the French Language Charter, which states: “Les catalogues, les brochures, les dépliants, les annuaires commerciaux et toute autre publication de même nature doivent être rédigés en français.” (‘All other publications’ apparently includes websites.) I teach in English, and much as I’d like to in French, can’t do so with the same fluency. My French simply doesn’t penetrate the subtleties of idiom and story-telling, both of which I lean on heavily in my classes.

The conversation was brief. I explained that Quiet Mind was not a commercial enterprise, and that the revenue just covers expenses. In my best formal French I added that I have two commercial websites, both bilingual. Formal French is easier than vernacular. I’ve never managed a good, heated argument in French, but if I stick to technical subjects — I have good vocabularies for computers, grammar and the law — I can impress professionals and, apparently, bureaucrats. The lady I spoke to at The Office was charming. She complemented me on my French and assured me that as long as I taught only in English, a French website would be unnecessary. Finally she added that, if ever I chose to teach in French, I’d need to advertise in French too.

Everything had gone well until that moment. The implication was that, without the Charte de la langue française, it would never occur to me to advertise French courses for French-speaking people in French. She seemed to assume that, being an Anglophone, I’d naturally attempt to do so in English. I almost asked if she thought I was a complete idiot, but kept my mouth shut.

The question of indépendence and the primacy of the French language still dominate Quebec. After almost thirty years here, I still see little rationale for either sovereignty or federalism — only emotional partisanship. Anglophones can’t believe my impassivity towards the issue, not realizing to what extent the ‘two solitudes’ mindset has preoccupied their thinking. I see this as more of an ideological debate than a political one. But what do I know? I’m just a poor immigrant. I steer clear of the authorities when I can; when I can’t, I pull down the brim of my hat and maintain my ignorance.

5 thoughts on “The Office”