Quiet Mind student Falk Kyser asks, “using the Buddha’s teachings, how do you make an important life or business decision?” Falk is not one for little questions. 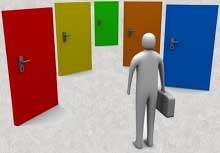 Spiritual pathways like the Buddha’s are making some impact in the business world, but only baby steps. There’s still a long way to go in overcoming the perceived gulf between spiritual and material pursuits. I say perceived, because there’s no practical difference at all. Let me explain:

My own introspective life, as well as feedback from meditation students, has shown me that much of what we call perception is in fact preconception — we tend to see what we expect to see, sometimes even what we want to see. Buddhism draws attention to this by guiding us in mindfulness practice towards bare perception (manasikara) — sustained attention to something in the present moment — usually the breath. As beginners, we discover that bare perception is almost instantly overtaken by the feelings, attitudes and mental constructs that constitute the inner chatter. Among other things, mindfulness slows down the interdependency of those mental events so we can: a) see how the untrained mind works, and b) develop focus and make more informed decisions.

Most business leaders see meditation and spiritual pursuits as woolly-minded and impractical — something that, if you really have to, should be done outside of the workplace. It’s hard to blame them. On the other side of the imaginary divide, ‘spiritual’ teachers and practitioners consider themselves at war with greedy materialists, and favour wishful thinking over hard-nosed materialism. What both camps are missing is that authentic paths to mental freedom don’t separate the spiritual from the material but reunite them in organic, practical and everyday ways. That’s what core Buddhism’s all about. Of course, Buddhists can be woolly-minded too; wishful thinking’s a natural tendency of the human mind. Just because you ‘believe’ in the Buddha is no guarantee that you’re actually following his example. The point, as the Buddha himself made on many occasions, is to explore your own mind and, knowing it, come to your own decisions.

There’s another perceived conflict between business and spiritual thinking: goal-oriented versus non-goal-oriented behaviour. Organized managers and business leaders favour rational thinking and planning for good reason, but they often lose sight of the fact that people are driven by emotion. Scientific studies have shown that most reasoning takes place after the fact—to justify a foregone decision. The good news is that emotional decisions aren’t necessarily wrong ones; the bad news is that we often think we’re being rational when we’re being emotional. If you’re looking to know your own mind and how it works, such rationalized excuses are just more mental constructs that pile layer upon layer of mental chatter, adding to confusion and causing bad decisions.

The most common source of confusion in business is thinking that the bottom line is money. It’s not — it’s survival; money is only one component of survival. Ethics, satisfaction, self-esteem, integrity, dignity, honour and compassion are qualities that serve both individuals and organizations, promoting long-term growth, happiness — and survival.

The practice of mindful reflection develops these qualities by combining mindfulness —sustained attention to what is (as opposed to what one wants), with insightful reflection — an understanding from your own experience of how you’ve made decisions and how they’ve worked for you. By focussing quietly on your mind in the present moment you clear the fog of preconception and, instead of falling for your own rationalization, see past it to your emotional motives.

For example, I was recently referred to a new client by a supplier who, over the years, has passed several opportunities my way. After the job, the client alerted me to a problem which I fixed immediately at no charge, the unspoken assumption being that I’d ‘overlooked’ it first time around. A week later, my supplier called to explain that the client was in the same situation, and was now upset.

My instinct was to protect my reputation at all costs. In fact, my hand was on the phone to tell the client I was on my way, but at that moment I detected the pang of resentment. I put the phone down and stopped to reflect. I’d been careful to do the job right second time around, and knew I could guarantee it. Looking deeper into my own motives, I realised that I resented going back because the only explanation was that my client had ignored my advice on how to implement the job I’d done, and had in fact spoiled it himself. He must have known this but, unwilling to assume responsibility or pay me fairly for a subsequent visit, he blamed me.

I wasn’t entirely unsympathetic — perhaps he thought his emotional decision was actually a rational one. I’d explained to him the dangers of modifying the job I’d done, but he’d insisted that he had to do so, and was therefore able to (wishful thinking). Clearly, he lacked the knowledge to troubleshoot his modifications and now expected me to do so. On the one hand, I realised I should have looked more closely into the terms of the job before I began; on the other, his decision was his own responsibility.

Recognizing that the situation was irresolvable, I decided to sever my link with him and suffer the consequences rather than proceed deeper into the mire of an untenable relationship. In seeing my own resentment in time and recognizing it as a red flag, I’d avoided wasted time, personal recrimination and more damage to my reputation. I’d also stopped enabling him to believe in his own non-existent skills and learned an important business lesson: to carefully consider the terms of any contract in advance. As any competent negotiator learns, that’s a skill you just keep revisiting; there are always new mistakes to learn from.