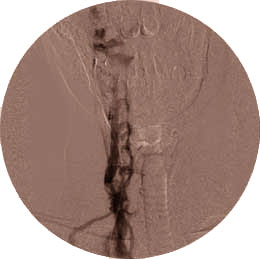 Caroline’s undergoing veinoplasty as I write. We arrived in Albany on Friday and she had her preliminary ultrasound the next morning, when we stood in line with all the other Canadians. We’ve filled the time since then shopping, retreating to our hotel room and generally feeling anxious. We’d have liked to have shopped more for Christmas, but Caroline’s limit’s about an hour.

These have been four days of hope and doubt. People who undergo this procedure sometimes experience an immediate benefit, sometimes not; what benefit there is might fade with time or be stable; the benefit may be immediate; it may come later; it may not come. Caroline’s Doctors Kenneth Mandato and Gary Siskin are the first to admit that they have no idea if or when this will work, let alone why. They’ve performed some five hundred procedures so far and continue because patients on the whole say they feel better. For the doctors and their team, that patient response trumps the requirements of scientific explanation. For doctors in the Canadian medical establishment, and some in the U.S. too, that’s unacceptable; they put science before compassion and excuse it as professional caution. As they proceed, the pragmatic, heart-first Siskin and Mandato are collecting data they hope medical number crunchers will help them turn into explanations.

I’m here to support Caroline, but we’ve been nervous and antsy, snappy and short-tempered. It’s a roller-coaster. I’ve learned in the last ten years that there’s a lot more to chronic degenerative disease than symptoms. I’ve watched Caroline work hard to accept her growing limitations: her legs obey her brain less and less, her fingers stop typing in the middle of a sentence and won’t start again; she never knows when her energy or alertness will desert her. Accepting that takes a huge mental effort — a side of her I constantly admire. Having achieved that acceptance at great personal cost, she’s reluctant to give in to hope. Imagine having to rebuild nineteen years of acceptance all over again; it was hard enough the first time around. You may say there’s no choice, but you’d be wrong. Many find an alternative in defeat and brute depression.

Hope’s a two-edged sword that we all wield, every day. Who doesn’t know their end will come? We don’t just live with that harsh reality, we flourish under it, investing in life as if we’re immortal. Caroline’s balance between acceptance and hope is different from the rest of us because she’s been reliably informed that it’s different, and because she feels it in her whole body. In the last days she’s said a hundred times that all she wants is to live an ordinary life — but what’s that? Would I so easily accept my three score and ten if everyone else lived the lifespan of a giant tortoise (about nine score)?

Rationalize it as you may, Caroline sometimes feels short-changed but mostly just counts her blessings for each healthy and productive day.

She’s out of the procedure. Everything went as planned. They found narrowing in both jugular veins, and ballooned each one open. No stents were used. Caroline found the procedure uncomfortable; two other patients she met here claimed to feel nothing. The doctors aren’t surprised one way or the other. Now we wait and see.

The morning after, we’re back for the concluding ultrasound, to see if the veins remained open overnight — so far, so good. In the waiting room, the woman next to us is excited; she feels “terrific.” Her enthusiasm is contagious. “I jogged this morning,” she says. “Well … jogged, you know — not like I used to but better than for years.” Of course people want to read success into the ordeal and expense of this experimental treatment. The others we met had travelled farther than we, and may well have been more hard-pressed to come up with the money.

The lady was diagnosed eighteen months before. In the early, relapse-remit stage of MS, you suffer attacks, then feel better. If you’re on MS drugs, or undergo this procedure, or go on the gluten and milk-free diet suggested by natural health advocates, it’s tempting to attribute any relief to whatever ‘solution’ you’ve chosen. However, you never know. MS is so unpredictable it’s even been known to stop — just like that. Doctors have no explanation. Truth be known, they still haven’t figured out what actually causes it.

The lady next to us asks what MS drugs Caroline’s used for the last nineteen years, and is wide-eyed at Caroline’s answer: “None.” The lady injects Copaxone daily.

While insisting that veinoplasty’s dangerous, Canadian Medicare forks out $20,000 a year per patient for this drug. Copaxone’s side-effects include flushing, rash, shortness of breath, and chest pain. Caroline’s in pain after the procedure, but it’ll pass; she’s not doing it every day. How effective is Copaxone, and how about sticking it in your veins every day for the rest of your life? After two years of daily injections, 78% of patients on the drug are progression free, as opposed to 75% on placebo. If I were a statistician, I might be impressed; I’m neither. One year of this drug costs three times as much as this procedure in the U.S.; about ten times the estimated cost of doing it in Canada. The internet is rife with speculation about the politics, medical turf-wars and shady dealings that go along with all those dollars and marginal percentages.

Caroline’s beyond drugs, however. She’s now secondary progressive, meaning that instead of attacks and remissions there’s a steady decline; fortunately, it’s not rapid. There’s no medication for secondary MS — nothing even as questionable as Copaxone. If she experiences any improvement now, she can attribute it pretty fairly to the veinoplasty. We’ll see.

In spite of this disease, Caroline’s built a hopeful life for herself that, by taking her multiple sclerosis into account, avoids false hope and wishful thinking. Her work, her children and her marriage bring her enormous satisfaction. She has a life. Anyone who’s met her knows she’s full of life. She wants it to last as long as possible. Don’t we all?