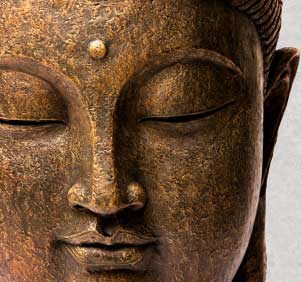 Mindfulness is a scalpel that uncovers layers of habit, ingrained prejudice, denial, self-doubt, fear, anxiety and unwanted reactions. Once you’ve brought these states of mind to the surface, mindfulness remains a powerful tool. When it comes to personal change, nothing quite compares. If you’ve never done it before, it’s never too late to learn; if you’ve already begun, there are always new layers to discover. Unlike studying computers or a learning a new language, mindfulness is a life skill that makes you a better person and changes your corner of the world forever.

It all begins when you decide to give yourself the gift of looking inwards. Some people are afraid of it, as if ‘meditation’ is just for weirdos. True, spending your whole life navel-gazing would be crazy, but never doing it at all is downright unhealthy. We all need a little maintenance.

Traditionally, it’s called ‘meditation.’ The word means lots of things to lots of people. The most common description I hear is ‘emptying the mind.’ That makes sense if you think of the mind as a container, but it’s not. It’s a process — an ongoing interaction with the world of the senses and the imagination. Short of dying, there’s no way to stop the process.

What students of Quiet Mind Workshops usually want is to quieten the mind and get it under control. They find their minds chattering away endlessly whether they want it to or not, as if they have no say in the matter. It’s disconcerting. In periods of stress, as we all know, it can become truly unbearable; that’s when most people think of doing something about it.

However, despite meditation’s reputation as metaphysical and extraordinary, it’s not magic. If you want a quiet mind during periods of stress, you have to start training it during periods of calm. You’re developing a skill, like reading. It takes only a few days to master the alphabet, but understanding and enjoying a Tolstoy novel takes practice, though it’s worth it. If you think reading’s useful, meditation is even more so. It gives you focus, calm, clarity, empathy, the ability to see and change bad habits … it brings direct insight into the workings of your own mind.

Today ‘meditation’ is giving way to the term ‘mindfulness.’ It’s been around for a long time but it’s suddenly becoming accepted by doctors and research scientists. It’s now both respectable and popular. Popularity’s good, but it often blurs the full meaning.

Mindfulness is the practice of bringing your attention to what’s happening right here, right now. It’s the very opposite of the chattering mind which seems more intent on avoiding the present moment. Avoidance is the easy way to react to things we don’t like. It pretends to decrease stress, but in the long term it leads to a complete loss of mental control; as we’ve seen, that’s the worst stress of all.

Mindfulness is also the opposite of emptying your mind. It’s an activity; It requires focus, patience, energy and determination. Because of its enormous simplicity, it’s unlike any other challenge you’ve faced. Conquering great obstacles brings a sense of accomplishment, but the rewards of sitting quietly are more subtle.

The problem with the way mindfulness is discussed these days is that it’s presented as an end in itself. True, it’s a wonderful thing to be fully aware of your life as it happens — to ‘smell the roses;’ but mindfulness has much greater benefits than the pleasure of being attentive. How does it work? That the subject of Quiet Mind Workshops.

3 thoughts on “The Gift of Looking Inwards”