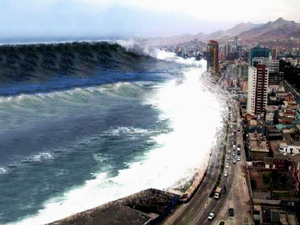 What an extraordinary time we’re going through. Some people are saying that the earthquake and tsunami in Japan are just the tip of the iceberg, and that March 11, 2011 began a new era — the Revolution of Consciousness. Expect more catastrophes as Isaiah, Nostradamus, Cayce and other great seers are fully vindicated — but also great and good things as the world is purged and the human race is forced to step up to a higher level of consciousness.

Last year too was a bad one. Natural catastrophes cost insurers more than ever before — a whopping 37 billion dollars, never mind the human toll: 230 thousand dead in Haiti; two years before that seventy thousand in Sichuan; eighty thousand in Kashmir in 2005 and another 230 thousand in 2004 from the tsunami off Sumatra. Then there were hurricanes, volcanic eruptions, landslides, pandemics and famines. Mother Nature is awesome indeed — not always as nurturing as we like to think.

And then there’s us. We’re even more powerful than nature — tah-dah! —  waging war without cease and counting our dead by the millions. Yes, there’s always a war going on, though not always on that scale. As you read this, nine major conflicts are costing at least one thousand deaths per year, never mind the heartache, dashed dreams and maimed lives.

What have we learned from all this? That war is hell. That humans are stupid. That rebuilding is lucrative, and there’s profit to be made if you play your cards right.

Look back in history as far as the archeological record and the printed word allow, and you’ll find nothing strikingly different in any era. Technology has evolved it’s true; it’s made our life so complicated that we have less time to notice that plus ça change, plus c’est la même chose. But in the world of ethics and human behavior, I struggle to see some significant differences, some evidence that we are progressing. Most curiously, when I look inside myself I see that I really hope to find evidence of progress, of providence or a helping hand. It’s not objective wish — it’s a visceral longing — the sort of impulse that makes us see what we want to see, as if it would make a difference.

Whether predictions are borne out by reality or not, there’s absolutely no way to satisfactorily prove or disprove the claim that some people possess uncanny powers. Nevertheless, for believers and detractors alike, it’s a source of enormous passion. Why does it matter?

I just finished reading A Short History of Everything, in which author Bill Bryson rather impressively fulfills the title’s promise by accounting for the evolution of the universe and everything in it, including us and our knowledge. Taken at this level, science describes miracles as plentifully and as inexplicably as any shaman, soothsayer or prophet. The various conditions needed for life are so complicated, and depend on such unimaginably coincidental timing, that our very existence seems astronomically improbable. In cosmic terms, the relative peacefulness of the human race’s few thousand years is hard to believe — a tall story if ever there was one given that our universe, solar system and world were formed by nothing more or less than continuous cosmic cataclysm.  The earthquakes and unnatural disasters described above really — really — don’t come close. Compared to the meteor impacts, ice-ages, tectonic shifts and miles-wide volcanic calderas of not all that long ago, recent history is a model of peace and prosperity. Sorry to use the word again, but it’s a miracle we haven’t been wiped out yet.

So what? Why does it matter? Well, we all have our own belief systems to answer this. Mine is Buddhism — sort of. I have my own take on what the Buddha was on about, but it clearly was quite different from conventional religion. He advocates fewer beliefs — I’d say none at all, if at all possible. He counts on quiet observation of what we can know for ourselves from our own experience; he treats theory and explanation with a healthy dose of skepticism. Who put us here? Why? These question are already loaded with presumptions plucked from thin air. I love the Buddha because he specialized in reducing facts and questions to their simplest possible form. Here we are. What now?

His answer? Live with attention, insight, compassion and acceptance. What else? Will we get better? If we try. What helps? Understanding ourselves — no, not theorizing — understanding. You can spend your life trying to prove the existence or non-existence of gods, providence or progress. Think you’ll find conclusive answers that everyone will finally agree on? Think again. Even if you were to succeed, what would you do with the terrible weight of all that knowledge?

Life doesn’t need proof, prediction or explanation. As homo sapiens, we use ideas to survive and prosper; fine. Beyond that, playing with ideas and theories can be fun. But in the big picture, we really need to take them all with a grain of salt — not just religion, not just new consciousness, but science, technology and academic research too. Life’s too short.

If we really want to make the world a better place, we need to shed opinions, prejudices and the presumptuous need to do or say something even though we don’t actually have a solution. For that, there is no more  powerful tool than mindfulness. It’s not an idea; it’s a practice.