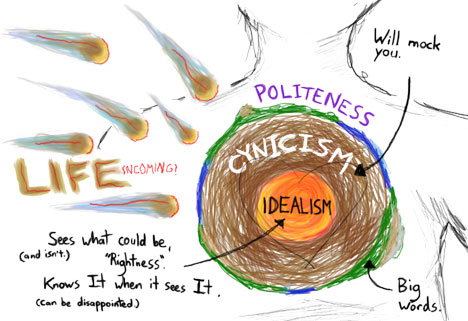 Canada’s just kicked off a federal election campaign. Once upon a time this would have been purely regional news, but I’m seeing something that’s mirrored in the US and Europe too — deepening cynicism among voters, politicians profitably disconnecting from reality and democratic values turning into shells of cliché and empty rhetoric.

None of this is new, and that in itself makes me think. In recent days I’ve watched a video of a twelve year old girl telling off the United Nations Conference on Environment and Development, an eloquent, new yet classic anti-war rant, a beautifully produced (another) manifesto against blind conformity and an old, old recollection of Jimi Hendrix’s If 6 Was 9, which promotes individuality against both culture and counter-culture.

It all resonates for me. It always did. The twelve year old girl’s speech was so timely I assumed it was yesterday; in fact it was delivered two decades ago. Old rants against the phoenix of old wrongs, both perennially renewed. The outrage of my sixties generation was unprecedented. We were uncompromising. We weren’t pretty. We were communists and anarchists. Some took up arms. We were sure to turn the tide of corporatism, money and war. Instead, we were slowly recruited into the fold. Today, power-brokers spin the concepts of freedom and democracy while racking up obscene profits at the cost of our planet, our health, our sanity and our social cohesion; some of them are my old comrades.

The English philosopher John Gray said, “…intolerance for reality is innate in the human mind.” In Canada, our prime minister has spun the concept of political coalitions — a venerable, practical feature of parliamentary democracy — into a spectre of lingering evil. His opponents have fallen hook, line and sinker for this misrepresentation and spent time, money and credibility defending themselves against it and accusing him of doing the same thing, as if it were a problem — or even an issue. It’s a non-debate — a diversion that treats voters with unprecedented contempt. Perhaps we deserve it.

The intellectual and emotional level of political debate seems to have reached an all time low. Instead of exchanging views and perspectives, political foes today cast aspersions on one another’s intelligence and integrity. This ignorant disrespect is reflected and magnified in hundreds of thousands of comments on political blogs — disheartening forums of insult and abuse that split the political spectrum into your side and mine. Fix your allegiance and slag the other. It requires no thought, no study, no effort, and apparently delivers enormous, obnoxious self-satisfaction. Here are our neighbours, parents of the next generation, power-brokers of the future. Many are university-educated in specializations so narrow that they’re actually profoundly ignorant of the context in which they spout their ‘opinions.’ Is the educated class a thing of the past?

It all makes me wonder whether our forefathers were right to give a vote indiscriminately to every man and woman. Shouldn’t that right be a privilege, conditional on actually contemplating the issues, or at least acknowledging that other points of view might have merit? How can anyone be so sure of themselves?

Which brings me to my field — the contemplation of human motives. I recognize blunt certainty: it’s a cover-up of existential unease, of the instinctive knowledge that nothing is sure. How few people — even fewer public figures — acknowledge that life is a mystery for which we have many theories but no answers. The healthiest among us take their knowledge with a grain of salt and keep their minds open. Those who cling to certainty with violent conviction are driven by forces that may originate within them, but from which they’re profoundly out of touch. John Gray continues, “The pretence of reason is part of the human comedy.”

We need a thoughtful society. It’s asking a lot — so much that you’re probably already shaking your head, incredulous at my naïveté; but how can we ask for less? What about the omnipotent, omniscient, fictional ‘they’ to whom we always pass the buck? Will they do something about it? Shall we continue the long wait for human institutions to act humanely? ‘They’ will continue to pursue their own interests by clumping into power structures too big for any of us to bring down, short of violent revolution. Real solutions will not trickle down from the top; they can only swell from the bottom up — from us. Be mindful, think reflectively, learn empathy. Teach your children, with words at least but more importantly by example.

Our society has become a frenzy of acquisition that may well implode. We have more stuff than our forefathers, more than we need; far too much to make us happy. Managing it is so onerous that we find ourselves under stresses that are poisoning society and killing us — and ours is the fortunate, developed, ‘advanced’ society. More stuff stimulates more need, more greed, less introspection. Maybe one day the battle lines will be drawn and we’ll bring it all down by force. But then, just like our prime minister’s foes, we’ll have fallen for their spin and will just rebuild in the image and likeness of those same old aggressive passions. Study history: it’s happened before with numbing regularity.

It’s hard to keep hope, and yet — fortunately — we’re programmed to keep hoping. It’s irrational, probably impossible, but I can’t help it: I want a sensible world. What little we can do is dictated by circumstance, not by whim and certainly not by belief. Will we cultivate sensitivity to circumstance, to the messages from the biosphere and from those within it? It’s the incontrovertible message of the stewards of the Earth — the aboriginal cultures — but will we ever again find such clear simplicity?

Feel helpless and outmatched if you must, but don’t leave it to ‘them.’ Go inwards; seek insight. By simply pursuing personal balance we model it to others, and remind each other to be respectful, clear-headed, thoughtful and forceful in expressing what we believe while acknowledging that that doesn’t make everyone else wrong. Whatever else we might do, it has to begin with this. Take little steps and long strides may follow. Take no steps and you foster the growth of cynicism.