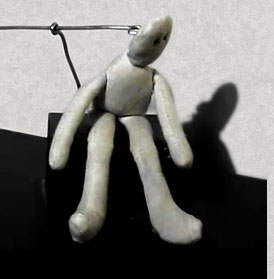 I first met Georges in 1980 when we were both Buddhist monks. Shortly after returning to lay life, he invited me to join him in Montreal. I’d had enough of the holy robes, and thought I’d spend a year here before moving on to who-knows-what future. Each March 28th anniversary of my arrival surprises me. I can’t believe I’ve grown nearly thirty Canadian winters older.

We had lunch together this week at Scarolie’s, in Pointe-Claire. Afterwards, pushing his plate away, Georges commented that he hardly recognized the bitter old cynic he remembered from our monastic days. “You actually seem happy,” he chuckled as if it were preposterous.

His humour was a sobering reminder of the distance I’d travelled. “It’s true,” I confirmed. “I am.” He scrutinized me while I waxed enthusiastic about all the good stuff that was happening. “It started after leaving my ex-wife.” I began. “That’s when I took back the reins of my life.”

Georges wasn’t around at that point; I’d withdrawn from pretty much everyone I knew from the old days. With monkhood I’d thought I was joining a community that was ethically superior, one step closer to ‘enlightenment.’ Much to my eventual disappointment, they turned out to be just men and women like me, facing their existential angst. Failing to realise what a fine basis for friendship that actually was, I wandered off, simply because I was unable to believe any longer in rebirth, enlightenment and the Tibetan way. After my stint in Sera Monastic University, all I knew for sure was that I’d tried to adopt a foreign culture and it didn’t fit.

The words of the Buddha, however, still rang in my ears. Each setback and disappointment confirmed his first teaching, “Now, this is unease.”* Every day I received another small confirmation of the unsettling truth that getting what you want — if you even get it — doesn’t end the unease; it just pushes it away for a while. The pleasures and transient satisfactions of life are temporary distractions.

I was gazing out the window at the traffic on St-Jean Boulevard, and rambling away. I looked back at Georges. He was listening intently.

“Once I took back my life, I began to see straight again. I met Caroline and recognized her not just as someone who would make me happy but as a helpmate, a real friend. She gave me the great gift of reminding me what I was passionate about. We’ve shared and worked on those things together for eleven years. I’ve also watched her grow in value in her own eyes, and learn to more fully express herself — all because of our partnership, our synergy. There’s more substance to this happiness than any I’d experienced before, and it helped me go further. I started doing in earnest what my peers have been doing for thirty odd years. I started teaching Mindful Reflection™ and writing consistently.”

“And that makes you a happy man?”

Perhaps seeing Georges familiarly before me regurgitated the memory of my old negativity. “Well, I guess my motivation is still my own pleasure — at least in part. Now, I’m a hedonist, a narcissist … a wannabe born-again Buddhist.”

For all this talk of happiness though, a wave of regret was washing over me. For twenty years I’d watched my old colleagues Stephen Batchelor and Alan Wallace rise in prominence in their teaching and writing while I’d sunk deeper into the morass of cyclic existence. Things might be going well now, but I felt I’d wasted two decades.

I changed the subject, asking Georges, “So how’s the diet going?” Since last fall he’d systematically lost eighty pounds by sticking to one meal a day, forgoing carbohydrates religiously and making do with the meagre consolation of chalky diet bars. It wasn’t healthy, but it was working.

“Surely,” I said projecting my own feelings, “you must get cranky from time to time. Don’t you crave your old comfort foods?”

“Of course I do, but I don’t give in; I’ve learned to see the craving as just restlessness. I’m restless anyway,” he said sardonically, “whether I eat what I want or not. I used food to push the restlessness away though — as we both know — it just keeps coming back. I medicated myself with food. Heck, everything I do is medication.” He laughed self-deprecatingly.

I, however, was awed. “That’s quite some insight,” I said.

Well, it’s true, isn’t it? Georges was his old dismissive self. “Maybe the Buddha was right.”

We smiled at each other.

In the silence that followed, things appeared in a new light. I was using regret to fill in the gap of restlessness — but I too had drawn insight from my unease. If I had anything to offer as a teacher today, if I had anything of worth to write about, it came from facing my angst. When I disrobed all those years ago, I’d refused to follow an academic trajectory, as Wallace had done, or to remain in Buddhist communities, as Batchelor chose. I’d decided to test the Buddha’s teachings face-to-face with daily life. I’d expected it to be a struggle — though if I’d known just how much, I might have flinched. In that moment, sitting in Scarolies’s smiling with George, I was glad I hadn’t.

3 thoughts on “My Lunch with Georges”