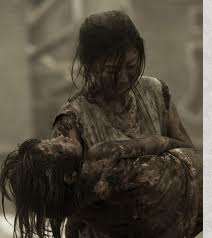 What with the recent Royal Wedding, the General Election and the dramatic assassination of Osama bin Laden, the banal reality is that Japan’s earthquake, tsunami and subsequent aftershocks two months  ago are no longer breaking news, and attention has shifted from the plight of those struggling to put their lives back together.

It will take victims years to recover; any aid they receive will be put to good use. Toyoda Yutaka of Tao Sangha Montreal has helped organize shipments of food, refrigerators and industrial size rice cookers to Japan in recent  weeks. He and his shiatsu massage students offered massages on May 1st in NDG, all proceeds going to their relief efforts, and will do a repeat performance in May at H~OM Yoga Fitness in Promenades Hudson, the exact date to be announced this Saturday May 7th.

On that day, Saturday  May 7th at 1:00 pm, I’ll  be giving a one-hour talk entitled, Helping People in Difficulty: giving without interfering; supporting without enabling. This will be followed by a book signing as well as information tables about ongoing events at H~OM, including a parenting workshop by Caroline, my wife and director of New Way, the upcoming Awakening Festival by organizer Lianne Bridges and an appearance by Toyoda Yutaka. All revenue and donations will go Canadian Red Cross Japan Relief.

We all benefit by working for and contributing to fundraisers like this. It’s a reminder of the extraordinary safe haven called Canada. Here we’re free not only of the starvation and ongoing wars that plague too much of the world, but also of the tornadoes, hurricanes and earthquakes that disrupt even our powerful neighbors to the south. Counting our blessings puts our daily troubles into manageable proportions and knits the global village that bit closer together.

Please support the H~OM Day of Learning & Giving on May  7th, starting at 1:00 pm at H~OM Yoga Fitness in Promenades Hudson, 3187 Harwood Boulevard.

1 thought on “The Terrible News that Isn’t”