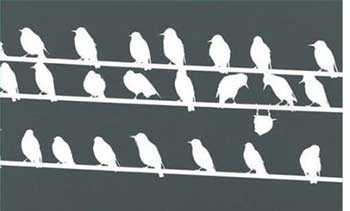 The power went out this weekend. There’s something special about sitting in the warm glow of candlelight with nothing to divert you but the art of conversation. Sure it’s a pain to shelve plans for the day and improvise cooking, but having no idea of when the electricity will come on again lends the experience a rare air of timelessness. It breaks the regularity of day-to-day life, reminding us that we have imagination, that we can always make do. Once freed from the technological cocoon we’ve wrapped ourselves in, life becomes necessarily creative.

You’d think that was a bad thing. Within minutes of the lights going out, gasoline generators rumble to life. I imagine the people in those houses diving for the on-switch, breathing a sigh of relief as the house turns back on and reaching for a cold beer.

Those machines preserve millions of dollars of perishable foods, save countless people from suffocating in heat waves and from freezing in ice storms. Originally intended to see us through real emergencies, they’re now commonly used to shield us from the slightest inconvenience. No need to miss your favourite TV show, change dinner plans or be forced into an uncomfortable silence as we face loved ones without the distractions of a flickering screen. For more and more among us, those awkward days are long gone, as old-fashioned as a hoedown. Our poor ancestors never had TVs, computers and smart phones. They never knew what they were missing.

A house without humming electric lights, vibrating refrigerators or hissing ventilation is eerie. You can actually hear yourself breathe. It’s terrifying to teenagers and busy working couples. You’d think young children and old people would be frightened, but they seem able to stare into the flickering flames of candles and let their imaginations go.
What’s the opposite of ‘restless?’ It’s what you feel a few hours into a power outage. It’s also the contrary to what ails us. Restless is today’s normal. We lament to friends and co-workers that we can’t stop. We worry about what everyday stress is doing to our bodies, our relationships and our lives. When stopping is forced upon us though, we cringe.
The industrial revolution was touted as the key to a new future. Technological advance and labour-saving devices would free us from bondage, providing leisure time in which to improve ourselves and the world. Seems like it was all spin. Instead of giving us breathing room, all that extra time is placing demands upon us that we’re powerless to resist. The opportunity to make more is too precious to pass up. More what? It doesn’t matter; we’ve long forgotten that we have enough.

How many of us are stressed beyond reason to make ends meet, to maintain a lifestyle that we barely have time to appreciate? We’re being done in by industrial disease. Our immune systems are out of whack, our good temper is too easily undermined, our nerves are shattered daily, our judgement too easily clouded. When we try to smell the roses we end up fidgeting. We confuse pleasure with happiness, forgetting that happiness is marked by contentment, not restlessness. When was the last time you wondered whether there was something more to life?
My family thinks I’m weird when I extol the virtues of the power outage, but even they agreed that you could at least get a good night’s sleep — once upon a time. This last weekend, power generators on all sides thrummed through the night. My wife Caroline’s multiple sclerosis is horribly exacerbated by sleeplessness. She could barely function the next day. Lying beside her as she tossed and turned, knowing that this was like driving hot needles into her skin, I occasionally fell into fitful dreams in which I fired rocket-propelled grenades into those generators, and went happily to jail. Then I’d wake up knowing I’d never do it, and my blood boiled helplessly at the thought of such thoughtless, selfish people.

All this happened last Sunday. It was a mild, late-summer night, neither hot nor cold. There was a hurricane a few hundred miles away but no state of emergency in Hudson Quebec, just wind and rain. I thought long and hard about those complacent, power-hungry neighbours, letting their machines spew out noise and air pollution without a care. Only our immediate neighbour had the decency to turn his generator off for the night. The others presumably rationalized their need to protect chests full of frozen meat; perhaps they needed the electricity to keep dialysis machines running. If they can afford a power generator, and really need to run it that badly, why would they not enclose it in a sound-proof enclosure? The only reason I came up with was, they don’t give a damn. “Everyone does it,” and that makes it right.

We’re addicted to a lifestyle that makes us want more. We’re so busy making ends meet, we hardly have time to raise our children. For many, that’s become the government’s job. We’re outraged at the lack of funded daycare but not by the sense of being cornered into a culture of selfishness. Year by year we watch TV, buy the things it tells us to and swallow its increasingly clever spin with ever-fading resistance. Buying into that whole game takes precedence over peace of mind.

We’re being turned into an anti-social society. It’s time to consider where we’re heading and to ask whether we really want to go there. Trouble is, there’s no time. We’re too busy making more.

5 thoughts on “Ode to a Power Outage”