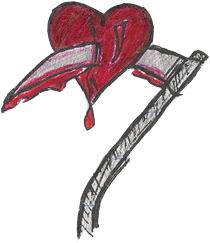 Ten years have passed, and in millions of small ways, Al Qaeda’s 9/11 attack has undermined our sense of security and our stability. It’s successfully nurtured disarray in our institutions and dissent in our ranks. The West’s response — flouting the Geneva Convention, special renditions and torture — speaks to the desperation of our leaders. Anti-Muslim sentiment reflects it on the streets.

We had to do something about it, but that doesn’t justify desperation. The horror of what the terrorists did doesn’t mean we must fill our hearts with hate. That’s what they want. We rejoice when one is killed, but if they’re happy to die, where’s the sweet revenge — and who ever benefitted from revenge anyway? Osama bin Laden is dead, but each time we compromise our values, he wins another battle.

At the outset of a more conventional war, Winston Churchill announced bluntly, “We shall never surrender.” He wasn’t speaking only of military strategy, but about the optimism and humor of the British in the face of overwhelming odds, about their willingness to sacrifice and their stiff upper lip. Our odds seem overwhelming too, though in a different way. The enemy is invisible; it’s ruthless; there’s no front line. Still, like the Battle of Britain, it’s also a battle of hearts.

We thought at first these terrorist were crazy evil people, but it turns out that many of them were educated family men and women. It was confusing, but also an opportunity to look behind the stereotypes and propaganda, to break down the us-them mentality. The horror of what they did a decade ago cannot be justified, but that doesn’t mean it can’t be understood. We call them inhuman, but only humans do this. What made these people, who loved and were loved, sacrifice their lives in order to kill thousands of innocent people and terrorize a generation? To walk away from this question is not just irresponsible, it’s cowardly.

Some among us are outraged at the thought that we should view the enemy as anything but monsters — that it amounts to desecrating the memory of those who died. This knee-jerk response has only one outcome: to prolong the hatred. How does that honor the dead?

It means you don’t allow the hatred to lodge in your heart.