As Westerners abandon their inherited religions and get used to the secular life, they’re turning in record numbers towards Buddhism, or something like it. There’s no God, you don’t have to believe in anything and it’s all very scientific. In fact it’s not a religion at all – so the story goes. 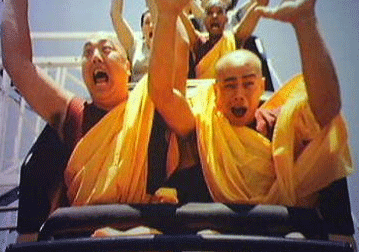 West or East, Buddhists are people, When it comes to spiritual traditions, they tend to see just what they’re looking for. Wishful thinking and group thinking are hard-wired into us. The Buddha understood this, and built this understanding into the substance of his teachings. That’s in large part why they’re so successful.

The Western take on Buddhism is really off. Travel to Asia and the first thing you’ll notice is that Buddhism is a religion. People kneel, prostrate and pray. They treat statues, paintings and books as sacred. And you’ll find the surreal politics that are unique to medieval belief-systems. This is especially so of Tibetan Buddhism, in which I spent my twenties. For eight fascinating, bizarre years, I lived the life of a medieval Buddhist monk.

Westerners’ misconceptions about Buddhism aren’t limited to the way they perceive the venerable old institution itself. They misunderstand the most basic of its daily practices. Most mistaken of all is the idea that Buddhists spend their time meditating, and that they’re consequently calm and sublime.

Not so. You’ll find most Buddhist monks doing daily chores, studying, teaching, practicing ritual and whatnot — not so very different from Christian monks. Only a tiny minority dedicate themselves to silent meditation. The Tibetan Gelugpas who taught me spent most of their lives in study and debate, a boisterous and at times undignified occupation that couldn’t be further from any new-age notion of emptying the mind.

And then, you’ll be surprised to learn that the term ‘meditate’ doesn’t exist in any of the classical Buddhist languages. What the Buddha taught was simply bhāvanā, or ‘cultivation’ of the mind. I call the Buddha’s way ‘mindful reflection.’

Although mindful reflection includes the concentrative practices we associate with the cross-legged lotus posture, that’s only one of three areas of practice. The others – ethics and insight – are crucial. Ethics is all about close, discerning attention to the ordinary events of daily life, taking care to do no harm. Just bookending one’s days with few minutes of meditative quiet is in itself going to get you nowhere.

The insight practices sound wonderfully sublime, but in fact they’re pretty hard to swallow. The Buddha makes the point that we mess up our lives by deluding ourselves. Insight is the process of seeing through those delusions and letting them go. It’s accurate to call this a process of disillusionment. He advocates a systematic letting go of consoling beliefs, opinions, attitudes and hopes. It’s not much fun.

But it’s all worth it, because the prize is Enlightenment! Practice assiduously and you’ll transcend ordinary reality to live on an elevated plane of existence!

Well, once again, there’s little evidence to support this fancy. In fact, the Buddha speaks out against transcendence in no uncertain terms. He bluntly insisted that his students stay firmly grounded in the here and now of sensory experience. The term ‘Enlightenment’ simply doesn’t exist in the Buddhist languages (nor do sacred, capitalized words). ‘Enlightenment’ has been used in the West for nigh on a hundred years now to translate the word ‘bodhi,’ which actually means ‘awakening’ – coming to your senses.

What’s really interesting is that what the Buddha actually taught is so compatible with today’s secular outlook on life. On the other hand, Buddhism in the West has a funny way of attracting people in search of escape — you know: those who interpret every bit of good news as the universe looking out for them personally.

But that’s okay. The teachings are practical and robust. If you pursue them with an honest heart and open mind, your practice can disentangle you from your own prejudices, misconceptions and false hopes. Mindful reflection has a way of bringing you decisively down to earth with a jarring but strangely satisfying thud.

12 thoughts on “So You Think Buddhists Meditate?”