“But I say to you, do not resist an evil person; but whoever slaps you on your right cheek, turn the other to him also.” —Matthew 5:39

I only recalled this famous bit of advice the other day when it was too late. I wonder if it would have changed the way I reacted. 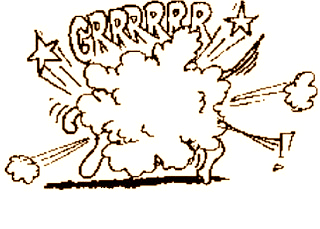 I was parking at Macy’s in Albany NY, and bumped a concrete post that marked the handicapped zone. A few people looked up, but there was no damage. However, a taxi driver parked a dozen feet away rolled down his window. He didn’t have to shout; he had a loud voice and his tone was belligerent: “Hey you! That’s a handicapped zone. You need a permit to park there. Do you have a permit?”

I looked over at him, frowned and nodded.

He began shouting. “You can’t park there you f****** Frenchie b*******. It’s a handicapped zone.” Obviously, he’d seen our Quebec license plate and jumped to a hasty conclusion.

“Mind your own business,” I said. I’ve encountered nutcases on four continents and learned to regret one thing above all: being dragged down to their level. My golden rule is to neither raise my voice nor curse.

He jumped out of the car, stomped up to me like an angry little boy and placed his nose a quarter inch from mine. I smiled.

“What are you talking about?” I asked. I’ve lived in Quebec for 30 years now, but never entirely lost my British accent. I certainly never acquired a French one. I was angry, but mystified too.

He continued to pour out abuse.

“Why are you so obnoxious?” I asked.

My wife Caroline had by now extricated herself from the passenger door and was waving her handicapped parking permit in the air. Our trump card! “Look…,” she began.

“You,” he swiveled on his heel and pointed at her face. “Shut up!”

“What?” She was shocked into silence – a rare thing.

Now I was mad. “Don’t you speak to my wife like that,” I advanced on him. “Who do you think you are? And how is this your business?”

He drew himself up to his full height – which to his credit was a head shorter than me. “It is my business, f***ing Pepé Le Pew. I,” he proclaimed proudly, “am a citizen.”

“Great,” I said. “So call the police. They’ll protect you from us.”

By now people were standing around open-mouthed. A mother bundled her child into the back seat of a car, glancing fearfully over her shoulder. An incredulous young African-American man approached the cab driver. “What are you saying?” he asked. “You don’t talk to people like that. That’s no way….”

The cabbie turned towards him and glared. The young man looked apologetically at us, turned on his heel and disappeared. I didn’t blame him. If this bizarre man could summon up so much venom for foreigners who were barely even foreign, I could only imagine what he had in store for visible minorities.

My blood was rising now and Caroline was calling me nervously to get back into the car. The thought flashed through my mind of what might be concealed in his glove compartment, but he’d returned to the cab and sat complacently with the window down, continuing his mantra of hate.

Clearly, nothing I could say or do would change this man’s mind. Still some hormone drove me to close the gap that separated us. I looked down into his indifferent eyes and said, “We’re leaving now. You’ve scared my wife for all I know you’re planning to damage or steal our car.”

It made no difference whatsoever. Just as I realized I was wasting my time he offered up, “Me, I’m Italian.”

“Really?” Throughout this exchange I’d completely forgotten Christ’s extraordinary suggestion. Worse still, before turning away from him I broke my golden rule by saying something to him in Italian. Something very rude.

It fell on deaf ears. He spewed on.

I believe very much in the power of compassion, but it took me a long time to see this person as sick and in need of help. For the rest of the day Caroline and I went around half-dazed. I felt a sense of mild guilt that I couldn’t quite account for. After all, weren’t we the victims?

Perhaps it was about me not quite living up to my own golden rule. Rather than remaining aloof, I descended to his level … almost. I thought now of another sage, this time the eighth century Indian Shantideva. “When their sandcastles collapse” he said, “children howl in despair. Likewise when I am no longer praised, my mind becomes like a little child.”

So what if some idiot thinks I’m an idiot? Ah, but somehow I did care, and therein lay my shame.

3 thoughts on “Turning the Other Cheek”