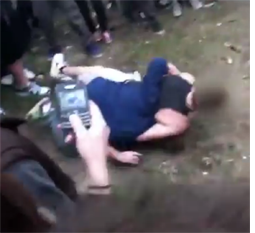 I was schooled in the fifties and sixties in English private schools. Britain was hanging on grimly to fading memories of martial greatness. Boys were encouraged to be manly, to settle matters of honor discreetly and according to the long-established rules of engagement known as the Marquis of Queensbury Rules.

Translation: our teachers turned a blind eye to schoolyard fighting. If they did witness it, they nodded in approval as they reluctantly separated the aggressors.

Flash forward five decades to our daughter’s high school in small-town Quebec and a fight between two boys that made it to YouTube and national media. A tall teen faces a much shorter one, feints once or twice and begins his attack. His opponent quickly falls to the ground and is pummeled viciously. It ends as the vanquished staggers pathetically into the bushes with a smashed eye socket and broken jaw. Most students are watching, cheering and laughing, or recording it on their phones. A girl calls 911, for which she is later ostracized and bullied.

I first heard about this on the afternoon of the fight, while driving my daughter home from school. The conversation went on all week as the story hit the headlines and some truly half-baked opinions crawled out of the woodwork.

Within a day the victor is expelled. The vanquished returns to school and is treated by the authorities as a victim. Our daughter is scandalized. “It’s ridiculous,” she says. “They both agreed to the fight. They both showed up. They’re equally dumb.”

She looked at me blankly.

This is one of those moments when I recognize that that I’ve aged beyond the ken of her generation. I never could recite the Marquis of Queensbury Rules but I knew they were summarized in that simple phrase. If you’re good enough to bring your opponent to his knees, you back off. That’s what makes a man a gentleman.

Unfortunately, the concept of a gentleman – like those of respect, fairness and integrity – is laughably old-fashioned and has no place in today’s sense of honor. If you are fortunate enough to get someone down, you finish him off.

Is this the fault of video games, the psychological result of spending more time in front of little square screens than engaged in life itself? Whatever. It’s a step backward. In the thousands of years of recorded history the instinct for brutality has not diminished. It’s only curtailed by social convention and, if it gets there in time, the law. ‘Civilization’ has made a difference, even though it’s responsible for as much counterfeit morality as real improvements in human life.

We explained to our daughter that being moronic is one thing. Agreeing to fight is another. Engaging in it is yet another. However, pursuing a man when he’s down crosses the line to something quite different. Thankfully, that made sense to her. Still, I’m shocked that anyone can make it to Grade Ten without even hearing the phrase, ‘Don’t hit a man when he’s down.’ She’s a thoughtful and ethical girl to whom others come for advice, but this most basic value was never conveyed to her in the very institution where her social ethics are formed. At home she learns personal and family values. School is where she figures out her place in society. That necessarily includes conflict and resolution.

Schools are not the places of social integration they used to be. Their mandate today is to impart scholastic information, while pupils are largely left to figure out right and wrong for themselves. Ethics courses teach them the general values of equality and acceptance, but where are the hands-on basics of self-control, fairness and integrity?

Civility is more necessary than ever, but today it seems too troublesome to fight for. Has social conditioning become politically incorrect? School administrators and teachers stand back, hands off, warned not to involve themselves in matters best left to parents. The trouble is, these aren’t family matters. They’re social. If teens don’t learn civility in school, where will they learn it?

The teenage years lie between the complete self-absorption of childhood and the mature responsibilities of adulthood. Do our schools no longer play any role in that transition? Are we living in indulgent times? What do you think?

3 thoughts on “The Aggression Instinct”