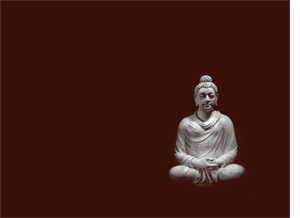 My wife Caroline was quite shocked recently when I spoke of the Buddha as mythical. “Well do you believe in him or not?” she asked.

“Whether he actually existed or not?” I asked “What’s the difference?” I was rather surprised by her surprise. I’ve long viewed the story of the Buddha, just like the story of Christ, as having a life of its own.

“Well,” I said, “it’s a way of speaking; a metaphor. The Buddha story has become a myth. Some of it’s believable; some of it isn’t. To swallow it all you have to believe in magic.”

“I don’t believe in magic any more than you do ,” said Caroline. “But I assumed the Buddha existed. I thought you knew about these things.”

“When I call it a myth, I don’t mean it has no basis in reality. The man Siddhattha may well have been born twenty-six hundred years ago in North India. He may have left his privileged life to wander the Great North Road. He may have discovered a particularly satisfying way of life.”

“‘Particularly satisfying?’ Is that your best description of enlightenment?”

“I sort of think so, but why does it matter? In either case, I have to figure out what he means to me, and if that has any bearing on my life. Was he more like gnarly old Socrates, or like holy Jesus? Which image has the power to inspire me?”

“So who he was is up to you? He’s a figment of your imagination?”

Caroline frowned. “I think your students would be confused to hear you talking like this. You’ve always spoken of Buddha as someone who lived in a time and place; that the way he lived and what he said mattered.”

“Look, let’s say he was born in that time and place, figured something out, taught for forty-five years and then died. Then what?”

“His followers got together to preserve his teachings.”

“To maintain it. Keep the tradition going, the flame alive.”

“Well there’s the thing,” I said. “They might have been master manipulators, out to hijack a growing movement and use it to their personal advantage, but let’s say they weren’t. Let’s say they were well-meaning men and women who missed their teacher terribly and wanted future generations to know about him.”

“And let’s look at Buddhism today, and work backwards. It’s been adapted by generations of people in different cultures. It’s a composite of all their efforts. It’s also a religion.”

“And the various Buddhist institutions in Sri Lanka, Burma, Tibet and all those countries have something to protect and defend?”

“Yes. They even argue among themselves, right?”

“Exactly. They all have an agenda. Now, take that attitude two and a half millennia into the past and imagine how the story’s been told and retold, organized and reorganized; how certain inconsistencies have been ironed out to make things easier for the faithful; how the story’s been simplified and retold for children, elaborated to capture their imagination. Imagine how some of those children were raised wide-eyed in monastic settings, insulated from the cruel world and in thrall of their own fantasies. They perpetuated the storybook image.”

“Like God as an old man on a white cloud?”

“Okay, So it’s just a myth after all. Where does that leave your students?”

“Not just a myth. It’s a way of life practiced for generations. People who take the time to look into it find deep meaning. It helps them live a better life.”

“And those people live side-by-side with people who believe that the Buddha was a superhuman magician. How do we know the difference? How do they know if you’re one of the good teachers?”

“You know the answer to that. You use your wits. We all have to. We try it out and see what works. If there’s one thing that’s consistent through this whole mess of history, myth and good intentions, is the idea that we have to think for ourselves. Everything’s corruptible, Buddhism too. No matter what other stuff you find in the scriptures, the reader’s reminded of that fact again and again.”

“So the truth and the myth are all mixed up together. What about all this new research into the actual existence or non-existence of figures like Buddha or Jesus using history and archaeology and linguistics? That’ll help.”

“It’s an interesting scientific enterprise, but if you’re looking for inspiration it’s beside the point. There’ll always be unanswered questions, probably hundreds. It’ll still be up to each of us to decide for ourselves. That’s the beauty of it.”

“So you don’t have all the answers? We laughed, remembering the awful time I was introduced to a roomful of people as ‘a guru.’