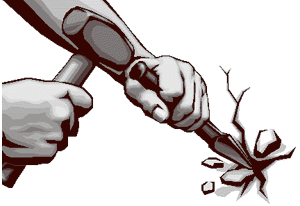 Much of what we believe is profoundly superficial. I’m not being ironic. Humankind’s ability to swallow what’s convenient and avoid the sublime is a dark door to its most illuminating insights. It’s not mere laziness that holds us back. It’s the fear of annihilation — so easy to understand, so hard to face. We cling to comfortable complacency, eyes tight shut, hoping the inevitable won’t happen.

Today I care less about what we believe, more about why. It’s a reflective question that yields great insights into our condition. But be warned: it also reveals the futility of most attempts to improve it. For example, the more successfully we prolong our lifespan with nutrition, hygiene and medicine, the more uneasy we are about death.

Iconoclasm is the attacking or overthrow of venerated institutions and cherished beliefs. It sounds almost like an –ism, but it’s the opposite, more of an attitude than a movement.

Traditionally, it attacks organized religion, but there’s no reason to stop there. Look: atheism used to be the mere denial of God, but recent references to the ‘atheist community’ and conversations about how members should behave have created yet another institution ripe for overthrow.

Iconoclasts don’t huddle. Finding common ground is all well and good, but there’s a line that people cross when trying too hard to agree, as if it somehow strengthens their case. Nothing expresses insecurity more than clinging to certainty.

The beauty of iconoclasm is that it’s personal. You don’t need to overthrow every iconolater. Just lose faith and the deed is done. It’s easy. What’s hard is to live without any icons at all. With each belief system I abandoned, I subconsciously found or set up a new secure zone. It took me a while to see that each was a stepping stone. Even then I had no idea what waters they spanned, or that I might swim. I wasn’t ready to take the risk.

Despite our science and technology we still lean heavily on faith. Einstein believed that God didn’t play dice. Without any evidence whatsoever, he never lost faith in the Grand Unified Theory. You’d think that scientists would necessarily be iconoclasts, but they’re just human. They sometimes fixate defensively on findings, forgetting that science is a means to knowledge, not the knowledge itself; that its real strength lies in doubt and creativity. Einstein had it, and lost it. Never take your iconoclasm for granted. We all waver.

Clichés become clichéd because they harbor a
germ of truth, otherwise, they’d just fade away

The label of science is no guarantee of objectivity; that quality is found in individuals, not systems. Similarly, religion and spirituality are not inherently fantastic. That too is a human attitude.

Today, many venerate the New Age. Oprah Winfrey has people dragging skeletons out of closets all over affluent America. That’s not a bad thing. On the other hand, our language is riddled with clichés like, ‘What goes around comes around’ and ‘Everything happens for a reason.’ Icons are less majestic nowadays, often just sound-bites.

Clichés become clichéd because they harbor a germ of truth. Otherwise, they’d fade away. Imagine our most ancient ancestors grappling with the emerging tool that today we call knowledge. They pieced it together haphazardly. Shamanism led to the occult arts, which eventually gave way to science. And so we believe in cause and effect. Nothing does happen without a reason, does it? Otherwise, things would stop working.

But that’s not what new-agers mean. Their’s is a plea for the universe to not be cold and indifferent. They’re suggesting that it intentionally does things to help us out.

Which brings us to God — another fiction with a germ of truth. The first hominids pieced their perceptions into a coherent whole, glimpsed causality and were presumably awed. Explicability itself might demand a name, and God might be it. Then — for psychological, social and political reasons we can easily imagine — they fleshed out this great abstraction, first with the faculty of intention, then a grandfatherly personality, and finally a long white beard.

Iconoclasts are sometimes attacked by iconolaters, sometimes just co-opted. Jesus taunted the Pharisees for their hypocrisy. Socrates stung his fellow-citizens with inconvenient truths. Both were executed. The Buddha mocked religious leaders for explaining the inexplicable. He lived long and his teaching flourished, but after he died his insights were reduced to a doctrine and his life to an iconic myth.

There is no permanent self, he said; the mind is not fixed. In our enlightened New Age people speak audaciously of no-self (Sanskrit: anātman) and no-mind (Japanese: mushin). Some Buddhists think that they don’t exist because there’s no self, that they shouldn’t think because there is no mind. It’s breathtaking how easily human beings divorce thinking from reality. We do it most effortlessly when we feel most insecure. 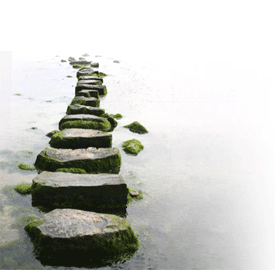 My favorite co-opted expression is ‘end of views.’ Meditators tormented by the monkey-mind fantasize about stopping all thought. Even if you could get yourself into such a trance, you have to wonder what for. Sooner or later life calls. What’s wrong with that?

However, there’s meat in the phrase. The ‘end of views’ is that leap of faith from the stepping stones into the torrent. Underlying it is an existential trust that although we rightfully believe in some things sometimes, nothing’s permanent. Truths change too.

The end of views is the iconoclastic attitude. It raises your hackles against dead ideas, intransigent beliefs, chauvinism, bigotry and dogma. It deconstructs opinions and acknowledges what we all suspect and fear — that life is ultimately inexplicable. It recognizes that the search for a worldview to explain everything is vain, and yet it never closes its eyes; it never needs to embrace bitterness. The bogeyman turns out to be approachable.

Science is fine. It makes the natural world predictable, enables technology and dazzles us with creation myths to rival the Book of Genesis. However, it doesn’t ask why we’re here or what we should do. Those questions incite either creativity or fear but never, it seems, indifference.

The notion that all life is coherent, explicable and solvable is responsible for great confusion and suffering. We can break our timid addiction to the notion that there must be one sensible approach to all we know, but it takes daring.

14 thoughts on “The Godless Joys of Iconoclasm”