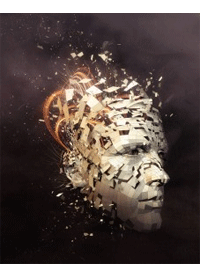 At this very moment millions of people around the world are attempting to stop their thoughts. Whether you’re a frazzled insomniac, a frustrated meditator or just plain anxious, chances are you’re acquainted with the intimate agonies of the inner chatter.

Why won’t your mind do what you say? Why can’t it just stop for a while?

Solutions are a dime a dozen. Some help, most don’t. The problem is that a) people are at their wits’ end, so that b) they’ll try anything because basically, c) they don’t know what mind is.

This last one’s the clincher. It leaves the market wide open for snake-oil peddlers.

Intelligence is not just about the brain

Mind is a process that begins inside the womb. Fetuses respond a bit to light and a lot to sounds, and of course to comfort and discomfort. By the time they’re born they’re voracious intelligence-gathering machines.

Intelligence is not just about the brain. Babies filter experience through the body’s five sense organs. They react instantaneously to sounds, sights, smells, tastes and touch, reaching for what they want, pushing away what they don’t and brushing aside the rest. It’s pretty basic.

However, mind can also do stuff by itself, without the senses. For example: memories. They deal not with stimuli from outside but with mental images from within. Like signposts, they stand in for something that was once experienced. Mental images are the building blocks of thought. Disciplined, ethical thoughts set us head and shoulders above other animals. Undisciplined ones set us apart in a whole other way.

By adolescence we’re highly dependent on thoughts. We use them to rationalize our responses, hiding, camouflaging or deflecting impulses, usually in reaction to other people. As we articulate the story of who we are, we grow into it with a sense of commitment and inevitability. That story becomes a suit of armor that both protects and entraps us.

The primal feelings of like, dislike and indifference are always at the root of our thoughts, but as experience grows more complicated it becomes increasingly difficult to stay in touch with them. Our responses are now driven by habit. We can’t be reflective about everything; there’s no time.

Once you believe that, you’re in trouble. Everyday experiences start to echo uncontrollably. The line between mental images and sensory experience is blurred. Your own mind grows maddened and disruptive. That’s when you want it to shut up.

Physicians prescribe drugs. New-Age gurus suggest you repeat phrases like, “My life is blossoming in total perfection.” Psychotherapists want you to delve into your past. A whole cottage industry has grown out of short-term stress management.

A long-term solution is at hand. It always has been, but few people have the stomach for it. It consists of taking time for yourself, bringing your attention back to your most basic feelings and experiencing the cycles of your own mind in real time. You can call it meditation, mindfulness or living in the moment, but most people would rather talk about it than do it.

The problem is not thinking itself; it’s addiction to thinking

Nothing is harder than simplicity. The resistance is palpable. Come up with some complicated thinking to attack the problem of thinking through more thinking, and you’ll soon have a thriving business. You might call it The House of Mirrors.

It never works of course. Even analyzing why just makes it worse. That’s when you throw up your hands, say, “To hell with it; I’ve tried everything else,” and turn to the thought of no-thought.

But the problem is not thinking itself; it’s addiction to thinking. By the time we’re adults we tend to see every situation as a problem to be solved. The idea that negative experience is an inevitable and acceptable part of life is hateful to our consumer mentality. The thought of being quiet in the face of life’s relentless challenges feels about as realistic as stopping Niagara Falls.

It’s not impossible to calm the flow of thoughts, but there’s no point in trying to do it while they’re gushing through at full torrent. Give yourself a break. The time to start trying is in quiet moments. Enjoy them; enlarge them; find sanity in them and you’ll grow resilient. Doing away with the weekly Day of Rest was a terrible mistake, even if organized religion is in decline. Most people went to their place of worship not out of unshakable faith in the supernatural but just to sit quietly for an hour and to let go of all the rationalizations about what can and cannot be done.

We’ve abandoned something important, and yet it’s still ours to reclaim. The experience of simplicity is obscured by constant rationalization but nurtured by thoughtful reflection. For a few minutes each day, turn off whatever machine has your attention, sit still and get used to the quiet. You’ll never stop thinking, but you don’t have to be so devoted to it that you’re tormented by your own mind.

5 thoughts on “Thinking About Stopping Thinking?”