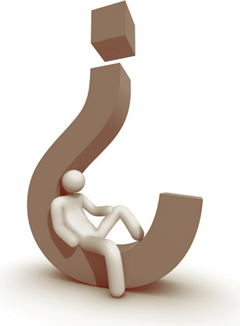 “There is nothing more dreadful than the habit of doubt. Doubt separates people. It is a poison that disintegrates friendships and breaks up pleasant relations. It is a thorn that irritates and hurts, it is a sword that kills.” [Attributed to the Buddha on viewonbuddhism.org]

I haven’t memorized the Buddha’s every word, but I doubt he said this, and I’m not the only one. The notion of personal loyalty doesn’t fit with his instruction to “be islands unto yourselves.” Besides, forthright doubt is a source of immeasurable flexibility and strength. It clarifies your thinking and lays your motives bare. It is vacillation, not doubt, that undermines purpose.

I can’t conceive of a Buddha that doesn’t place integrity over personal loyalty, nor one that doesn’t ruthlessly examine the contents of his own mind. Some have translated the Pali term vicikicchā as doubt, but in fact it means indecision, or flip-flopping, which is quite another thing. Besides, Buddhist scripture can be just as bewildering as any other. Miracles, magic and invisible demons go hand-in-hand with levelheaded psychology. You can’t translate without also interpreting, and even if you staunchly refuse to separate the believable from the incredible you’ll still end up prioritizing one passage over another. That’s how we make sense of things.

Which is why, as well as asking myself what I accept in the Buddha’s teachings, I also think about why I relate to them.

Orthodox Buddhists will explain their faith as a result of his impeccable doctrine, but that’s a rationalization after the fact. It’s just not how humans make decisions. No one will take his teachings personally unless they’re inspired by the life of the man Siddhattha. That’s what enables me to even consider what he has to say. Now I’m not talking about Aśvaghoṣa’s fantastic ‘Life of the Buddha,’ but the more down-to-Earth snippets pieced together from the Pali Canon.

It’s not an entirely coherent story, but I’m clear about what it inspires in me. First is Siddhattha’s rejection of consensus and his reliance on subjective experience. Next, his rejection of questions that lead to endless speculation. He also rejected wealth, his privileged life and the exercise of political power. The man rejected big things. His doubts ran deep and he wasn’t afraid to act on them. I too questioned much that I was expected to take for granted, and found the answers wanting. So, I relate to the man.

If we’re honest with ourselves, a rather inconvenient question now arises: are we really talking about a man, or is he a myth? There’s no historical proof of Siddhattha’s existence. You might decide with all your heart that he was born and lived more or less as described, but you know that’s just a belief.

I once thought that in order for me to lead the life of a Buddhist, all this had to be true. That’s pretty tenuous reasoning. One day, I admitted my doubts and let it go.

In people of faith, doubt excites abject terror. The suggestion that the Buddha is a figment or a ‘mere’ myth shakes committed Buddhists to the core. If he’s not true, how could his method be true? But these people are like theists who can’t imagine morality without God. The causal connection is imaginary. Years ago I recognized this disjointed, bad logic in my own thinking, and dropped my commitment.

The teachings promptly became far more accessible to me. That may sound paradoxical but in fact it’s just plain good sense. You’ll never scrupulously test something you’ve already decided is true. More to the point, how can Siddhattha’s doubts undermine your certainties if you’re already certain he’s right? Whether or not the character is fictional, the power lies in the myth as much as the doctrine.

Doubt is a source of immeasurable flexibility and strength.
It clarifies your thinking and lays your motives bare.

And the myth is all about overcoming fear. The notion that life is explicable is not even a myth. It’s a delusion. When we spend that life spinning and defending the spurious story of who we are, then we’re engaged in what for Siddhattha is our fundamental tragedy.

Some things do make sense. Some knowledge is useful. Nevertheless, life and we, its players, are contingent, unpredictable and mortal. We don’t know what’s coming. We can ask why we’re here, but we’ll never settle on an answer. We’ll only be satisfied when we let it go. Reason has something to do with it, but it’s mostly an act of courage.

My doubts are no more convenient that yours, or anyone else’s. They make me think when I’d rather not. They force me to backtrack and reassess. They’ve led me to massive disappointments, like abandoning a life I spent eight years building. However, disappointment is always accompanied by insight. It’s tough to see because it’s so unwelcome, but if our problem is illusion then surely disillusion is a step in the right direction.

One way to avoid your doubts is to go into denial. Another is to lean on faith, but beware of this slippery slope. Healthy faith is a provisional suspension of disbelief—an experimental but temporary space that sooner or later gives up results. You reassess and move on. Unhealthy faith, clung to desperately and untested by experience, is just another form of willful ignorance, built on fear. By believing it holds the truth, it corrupts it. Embrace the tenets and traditions of Buddhism as much as you want, but you can’t brush your doubts under the carpet and then claim to follow in his footsteps.

17 thoughts on “The Power of Doubt”