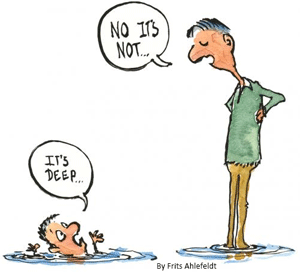 I’ve had plenty of ups and downs in my sixty years. I longed for deep insights and figured out some, but the ones that really count aren’t big and sophisticated. They’re rather ordinary. They come in useful every day. For example, points of view, or ‘views’ for short.

Two things are funny about this. First of all, I chose to see opposite verbs expressing the same meaning. Secondly, even though all this happened inside my own head, I couldn’t help but spell it out. I just had to. It was one more voice in my mental chatter.

I’m trying to cut down on that.

Some people would rather die than question their beliefs

Language is tricky at the best of times. Plain words are already nuanced, never mind the subtleties of grammar and idiom. It’s a wonder we understand each other as well as we do. Conversing with people you know, aided by body language and facial expressions, is one thing. Writing for people you’ve never met is another thing altogether. No matter how scrupulously you pick your words, there’s no knowing how they’ll be filtered.

Imagine the sort of issues this raises on a blog like The Naked Monk, which is about doubt and second-guessing yourself. Some people would rather die than question their beliefs. They need them—or so they think. We can’t live without views, but they always pose as a rational foundation even when they’re an emotional dependency.

Although my recent post on guru devotion (When Buddhism is a Cult) was well received, I expected some protest and got it. I’d taken liberties and made generalizations I felt necessary to get the point across. My goal was to provide moral support to people suffering from guilt for their loss of faith, and from abandonment for placing their own integrity above communal harmony. I’ve been there myself. It’s painful and confusing.

My post got off lightly, with just two critical comments from a single correspondent. Still, they were long and windy, picking apart my thoughts one by one. They weren’t without merit and I was tempted to defend myself, but something didn’t feel right. My point was emotional, his was theoretical. Mine dealt with people, his with ideas. After a little reflection I realized that my critic was much less interested in dismantling my views than in cementing his own. He even conceded that my big point was valid. He just took issue with the little points that led me there.

We become possessive and defensive
of our chosen or inherited views

You don’t have to be in a cult to end up buried in views. Every community expects its members to conform. Minor compromise is par for the course, but to maintain connection we sometimes compromise our integrity. At that point we need to seriously wonder why we’re there, but then we’re faced with the threat of disconnection. Until we cultivate the courage to question our own motivations, denial takes over by default. Whatever we don’t face, we flee or hide from.

In communities based on a sophisticated belief system, the effort we make to learn and conform is not just an investment of mental effort but also of emotional attachment. We become possessive and defensive of our chosen or inherited views. We rightly look down on those who swallow their beliefs whole, but that’s not the only danger. At the other extreme the effort to fit in predisposes us to identify with the views of the community, and to let down our critical edge. That’s a different sort of unhealthy attachment—one that goes deeper.

We’re in a period of intellectual openness and
freedom of views, but also of less restraint

Sticking to one set of views would be okay if they were right, but today we know that nothing’s that simple. Our forefathers believed their own views could only be right if others’ were wrong. Only crackpots and fundamentalists try to maintain that approach in the modern world. We’re in a period of intellectual openness and freedom of views, but also of less restraint. Unlimited choice is great in theory, but it’s burdensome. To choose one thing means to not choose others. Just making your mind up can be exhausting.

Whether or not all this really needs to be rationalized, we rationalize it anyway. We shore up our views, thinking that unless we defend them we ourselves are defenseless. It’s no wonder our minds swirl with thoughts, feelings, memories and justifications. Most of them are trivial. Balance doesn’t happen by itself. It takes constant attention.

It also takes adaptable thinking. Life is chaotic, and structured views seem to bring order to that chaos. It’s consoling to think that wise people thousands of years ago figured out why we’re here and what we should do, but the unsettling fact remains that no one really knows anything for sure. Even the scientific community is constantly pushing aside the status quo and reviewing its findings as old ideas congeal into dogma and are co-opted by all-too-human motives.

We don’t have to cling to views. We can just use them

We long to escape the terrible suspicion that life has no logical foundation. We cling to views as if they’ll save us. “Meanwhile,” as Bob Dylan says, “life outside goes on all around you.”

We don’t have to cling to views. We can just use them. They’re disposable. Some last longer than others, but they’re all measurable. In fact, not measuring them is a cop-out. If we don’t put them to work and see how they spin out, what’s the point? It’s not complicated. Really.

However, we are. We tirelessly invent points of view and systems of belief that paint us as evolving beings with an enlightened destiny. As proof we point to technological progress, conveniently forgetting that we’re just as motivated by vanity and emotional foibles as any other generation—even the ancients.

Science is great, but we still wage war. Even Buddhism, the great ‘rational’ doctrine, is painstakingly extracted from scriptures that are littered with duplicity, magic and cultural chauvinism. Every culture that embraces it picks and chooses the most suitable points of doctrine and ignores whatever’s inconvenient. This is not a criticism of any belief system, but of the people who claim it unconditionally.

All things are relative, but all things are not equal. Every day we have to tell right from wrong. We need points of view just as we need food and water, but we also need to digest them and move on. Truth is contingent.

It’s hard to believe that there are still people who claim to have found the big view; the view to end all views. They rationalize, but are not rational. Like the rest of us, they are emotional animals who also happen to have a brain, which is not to say we always use it wisely.

Let’s keep reflecting and thinking. We might figure stuff out. And then, if we really want to make the world a better place, we’ll let it go until we’re in need of another view.

8 thoughts on “The Blindness of Insight”