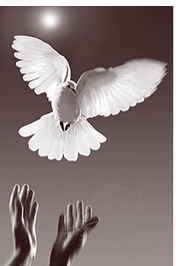 We all carry around our burdens. We shrug and say, “that’s life,” but burdens are not just responsibilities; they’re feelings we add on to the things we have to do, as well as those we think we have to do. They come with a sense that we have no choice. Tell people to quit the job they hate and they say, “But I need the money.” They don’t want to know there are less hateful jobs out there. Logic’s got nothing to do with it. They’ve made an emotional decision to stick with the familiar rather than face change and take risks.

We all get stuck like that sometimes. We use rationalizations to make bad decisions look reasonable and to hide from our own motives. It’s a form of denial. As a survival mechanism it gets us off the hook, but in the long run it’s toxic. Rationalizations are inclinations to see things a certain way. In time, they end up as obligations to our self-image.

Human beings are exceptionally good at rising to a challenge,
but only when they put aside their preconceptions.

The fact that perception is all in the mind doesn’t make it any easier to change. It only gives us a say. You can change, but not just because you decide to. It takes strategy.

We speak of the mind as if it’s a container of thoughts and feelings, but when we actually look at it, we see an ongoing engagement with the ever-changing conditions of life, spinning a web of incredible complexity. Mind is a process.

Still, it’s not random. There are patterns. The most interesting is our habitual perception of ourselves and others. It determines the weight of our burdens. We decide we are ‘resilient and able to cope,’ or ‘helpless and unable to change.’ Either way, we think we know ourselves and expect nothing more. That’s when we say, “But I need the money.” We don’t even realize we’re avoiding the point. Human beings are exceptionally good at rising to a challenge, but only when they put aside their preconceptions.

By trying to evade stress we actually accumulate it,
turn it into a habit and carry it around.

Instead, we see an unbearable burden and choose to bear it. Are we strange or what?

We usually face habits only once they’re a matter of urgency. The mere thought of changing our mental patterns stresses us out. In that very reflex the process becomes startlingly clear. By trying to evade stress we actually accumulate it, turn it into a habit and carry it around. Hence the burden.

We can rationalize it: carrying around burdens for the rest of our natural life is perfectly acceptable because everyone else does it. Rationalizations pose as intelligence but set your mind against you. You can’t keep them up forever. As Pi says in Life of Pi, “In the end the whole of life becomes an act of letting go.”

The problem’s not rocket science, and neither’s the solution The fact that it’s got so little to do with reasoning is exactly what confounds us. You can’t just figure it out like a puzzle, Instead, you have to retrain your perceptions. You need to believe in your ability to change and to cultivate the counter-habit of letting go. It’s simple but it’s not easy. It takes time, strategy and a good support system.

I’m teaching an eight-week workshop beginning February 21, entitled The Key to Letting Go. Click here to sign up or for more information.