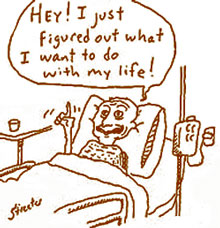 You may have seen the Heart and Stroke Foundation’s new TV ad. A split screen juxtaposes a series of images: an athletic shoe against a bedroom slipper, a bicycle wheel against the spokes of a wheelchair, the steps of Manchu Pichu against a powered chairlift, a box of fishing tackle against a box of medications. The voiceover man wants to know: “Will you be quick enough for a game of tag with your grandchild? Strong enough to embrace every moment? Will you grow old with vitality…or get old with disease? It’s time to decide.”

Ads like this won’t fix anything by scaring the vulnerable

I watched this with my wife Caroline, herself at genetic risk of heart disease. She also has multiple sclerosis (MS). We exclaimed at the same time, “So health is a matter of choice?” The sight of a wheelchair triggers special feelings for her. She’s been fighting it for two decades, as she has all her MS symptoms. She works hard to accept a condition she can’t change.

The message we were getting at that moment was that it’s her own fault if she ends up in a wheelchair. That’s not a rational response to the ad, of course. It’s a visceral one. It’s surely not what the Heart and Stroke Foundation intended, but it is what happened. They were presumably motivated by compassion, but their impotence is thinly veiled.

Painting reality in black and white as if it’s a simple choice is patronizing and counter-productive. It makes you feel guilty. It makes you wish to God you could change your lifestyle, but there’s more to changing habits than a decision. Ads like this won’t fix anything by scaring the vulnerable. It takes special skill and support to help people change, especially when it comes to the bad habits of a lifetime. Smooth and polished as it is, this ad says more about the frustrations of the Heart and Stroke foundation than about the people it purports to serve.

As medical science has advanced, self-reliance has retreated

We live longer than our ancestors mainly due to clean water and public sanitation. Still, we give most of the credit to medical technology. It can be dazzling, though it’s got nothing for the two and a half million people with MS. When it succeeds at anything we hear of a ‘cure,’ but of course there’s no such thing. Science merely extends life. On the whole, cancer survivors eventually succumb to cancer and stroke victims to cardiovascular disease. When this TV ad asks what your last ten years will be like, the implication is that if you play it right you’ll live life to the full, right up to the last moment. Then, you’ll abruptly and happily drop dead.

So dazzled are we by medical advances that we’ve become druggily dependent on them, so vulnerable to TV advertizing that we’ll fall for anything that’s slick enough.

As medical science has advanced, self-reliance has retreated. The Heart and Stroke Foundation is part of the reason we find it so hard to change. We don’t have to reject medical science, but we do need to take back our power. That sounds like a political decision but it’s really a personal one.

We can change habits, but not in a vacuum. We need to deeply understand ourselves. What we call our ‘self’ is mostly a collection of judgements hatched in different circumstances, a clutch of habitual responses and jumped-to conclusions. Managing change takes skill, support and effort. If you want the last decade of your life to be ten good years, you’d better look to the ten years before that, and the ten years before that. How are you doing now? Are you working systematically on your own mental strength and self-reliance…or are you putting it off for another day?

Caroline doesn’t manage her disease but her attitude. She can’t stop it any more than medicine can ‘cure’ anything, but she can make her life worth living. She’s thoughtful and funny, an inspiration to others. That won’t change if she’s in a wheelchair rather than on a mountain bike. Let’s get real. Death will get us all. What counts is how you live. The Heart and Stoke Foundation knows that, but they’re sending the wrong message nonetheless.

18 thoughts on “Guilting the Sick”