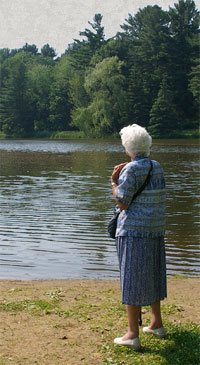 Driving past little Pine Lake in Hudson the other day, I was listening to the oboe’s baleful lament in Rodrigo’s Concierto de Aranjuez, and recalling my mother. Just a few years ago she’d stood on this shore staring at the red-tinged foliage and a nearby heron, still as a statue — both Mum and the bird, that is.

In the space of twenty yards I was intersected by the music, the memory and the scene. My eyes welled up. Mum’s at rest now, but that moment is seared in my memory. It’s not just about her; in the death of our parents we see our own mortality — a mortality I flirted with too freely while she was still alive. I still feel guilty for almost inflicting my own death on her — too recklessly and too often.

It seemed to me on that day that she was trying with all her might to imbibe it all, to get enough and finally let go; but eventually, turning away with a little sigh, she smiled and said, “Oh well! Never mind.”

As I pass through the middle years and am faced ever more bluntly with my own transience, I also find more acceptance. It’s not always like this; some people grow more fearful. That’s a shame, for life is to be lived, and the less that remains, the sweeter it surely is.  I thank Mum for that grace.

If you want to pass down some useful insight to your children, live life to the full, not necessarily without fear but without flinching, with your heart wide open. No need to say a thing. They’ll get it.