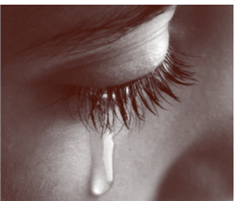 So say some people when you lose a pet. They may try to sympathize, but they don’t really feel it. Not everyone understands. It’s not just about who’s gone, but who remains.

Our family cat Shadow died suddenly this past week from an unsuspected cancer. He was just ten. Only last week we were joking about his chances of making it to twenty. His departure was a shock. We still find ourselves watching for him at the door, listening for his cry.

It makes you think that life’s unfair. It reminds you that everything’s so fragile. And how.

Those same people who don’t understand might say that keeping a pet is selfish. Of course it’s about us too, but there’s more to it than that. Some pet owners would have kept him going for a few more painful months, but we reserve that particular torture for our fellow humans. We spare our pets the pain, and ourselves as well.

You can choose what to think, but not what to feel

Thinking about how we form relationships, I recall the character Data from Star Trek. He was an android who puzzled constantly about what feelings were like. When a fellow crew-member died he expressed his friendship with her as ‘a sort of familiarity,’ and her absence as something he would ‘notice.’ We certainly notice Shadow’s absence. He was our friend.

Some would reply that Shadow was there for us because we gave him food and lodging. You could also say that we were there for him because he was warm and squishy. That exchange was constant and simple, unlike any human relationship.

We feel a hole and know it will heal, but that knowledge changes nothing until time works its mystery. Hope returns. With his indelible memory Data wouldn’t understand the impotence of knowledge. You can choose what to think, but not what to feel.

Sadness will be overtaken again by hope; that’s survival

So in time the hole in our heart will pass. The feeling will shrink to a memory. Sadness will be overtaken again by hope. That’s survival.

Everything changes. Nothing is reliable. We all die, and yet our hearts return constantly to hope. We know it’s a set-up. We do it anyway, without even having a choice. Knowledge can’t free us from the pangs of life. I used to think it could. I used to think that that’s what Buddhism was all about, but it was just a dream.

The best we can do with life is to awaken from that dream. The jolt of loss delivers us to reality. Painful and acute it may be, but it brings immediacy, a mindfulness we could never invent, a freedom we could never imagine. Hope may be treacherous, but we keep going back.

Where else can we go?

17 thoughts on “Shadow of Hope”