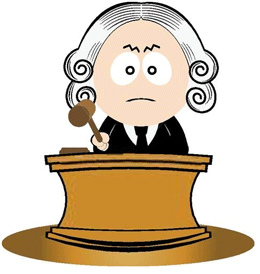 Our neighbor just forced us to cut our beautiful spruce tree in half because it was overhanging his property. Under Quebec law, he’s entitled. I also had to take out our lovely honeysuckle and lilac flowering bushes that were growing through his wire fence. His side of the line is now desolate, but he seems pleased. He demanded his rights; he got them.

Good ethical decisions take time, deliberation and integrity — three things in short supply these days. Rather then think, the lazy fall back on legal or religious codes. In either case, you get to feel ‘right’ with minimal effort and risk.

I always presumed that legal rights should do good, but I’ve been disappointed more than once. A judge once told me from the bench, ‘This court has no mandate to be fair, only to apply the law.’

Perhaps I’m naïve, but I’m reluctant to let go of it.

The world will never be perfect, but we can strive for something better than this. I survived the cold war and count my blessings to not be living in a Nazi or Stalinist state, but today’s status quo leaves much to be desired.

It’s good that we don’t have to believe in God, but can if we choose. It’s good that our gender, skin color, sexuality and age can’t be legally held against us. Still, the right to live on the fringes of conventional life still comes at a price.

If you think rights are dodgy, freedoms are even worse

There are more dubious rights: for individuals to own billions of dollars and ignore the poor; to manipulate millions into buying and consuming stuff that makes them sick; to use the law for strategic gain rather than the public good. Your neighbor can still sue you into doing something ridiculous.

Ancient religious codes were often corrupt. Legal codes are supposed to be more enlightened, but how different can they be when both are drawn up by the rich and powerful? They’re designed to sustain the institutions they represent, and are only incidentally aligned with cause-and-effect, self-knowledge and human empathy.

The trouble is, we’re founding a future in which we’re not obliged to listen to our body and minds. We submit to systems that make us dependent on rights, not clear thinking, that encourage us to sustain the status quo with scant concern for whether it’s right — or even whether it’s worthwhile.

Isn’t that what ethics is for? Rights are about what’s legal allowable, but the right life is a life worth living, with purpose and meaning.

We submit to systems that make us
dependent on rights, not clear thinking

If you think rights are dodgy, freedoms are even worse. Forget about personal freedom from base motives or from the tyranny of compulsive thoughts, today’s great freedom is the freedom to choose. Soon the entire human race will stand baffled in supermarket and pharmacy aisles agonizing over the right lifestyle choices. We already spend hours on the Internet, constantly sidetracked by fascinating tidbits and feverishly refreshing our inbox for new messages. We’re free to expend our libido on pornography without facing the complexities of human relationships, free to have children without really raising them, without even having meaningful conversation with them.

When we no longer feel it necessary to take a stand based on our own experience, merely on legal codes, we might as well be living in an authoritarian state. The great democracies today show signs of slipping in that general direction.

We’re distracted by the ‘debate’ between science and religion. Both are sometimes ethically right, sometimes wrong. Neither exist as objective realities. They’re just different expressions of human thought and behavior, replete with politics and self-interest. Most people are a somewhat scientific, somewhat religious and mostly impulsive. Science and religion work best when subjected to individual discrimination. But those who ask awkward questions risk being wrong. They also risk being excluded.

I’m not too pessimistic about the future. The human race has done well in some ways. Economics is gradually displacing war as the basic exercise of self-interest and that may be a good thing, though it’s far from sure. Nevertheless, the notion that progress is our birthright leading inevitably to a utopian future is an unhealthy myth. What peace and sanity we have is as fragile as life itself. We cannot sit on our laurels.

“Every act of rebellion,” wrote Albert Camus, “expresses a nostalgia for innocence and an appeal to the essence of being.”

I sense a reaction brewing. Here in Quebec where social engineering is disguised as the defense of language, where the threat of English is an excuse to abdicate authentic government, I sense healthy outrage. In the news today I read about an abandoned Toronto Mayor claiming that “Everything’s great,” a jittery Prime Minister trying to manage unmanageable secrets, and a former chairman of the Security and Intelligence Review Committee in jail for fraud. The cracks are showing.

And that’s just this week in polite little Canada.

I dream of constant personal revolution

Is the wheel turning once more? Perhaps the Occupy Movement is the overdue heir to the broken counter-culture. The time may have come for a sharp, painful turn in modern society.

And that’s the easy part. The real challenge is to build a new way. It’s not going to happen through leadership alone. For it not to fail, those who make it happen must begin the revolution in their hearts, determined to keep rights in perspective and to pursue the good. I dream of constant personal revolution.

There’s more to mindfulness, and especially to mindful reflection, than sedate attention and loving-kindness. It requires us to skewer our treasured privileges and protections, to hold them up for closer inspection. We need to see their real cost, to renounce the complacency they breed and, above all, to undermine the noxious greed that flourishes today across the globe.

Mindful reflection is seditious, meant to undermine, doubt and reassess our most basic values and motivations. Band-aids can’t cure the inner rot. We need to cultivate razor-sharp, fearless discernment. How can we question our own motives without questioning the goals of the society that formed us? We are not independent of it.

If there is any freedom worth pursuing, it’s not the one to choose the best toothpaste and new smart phone, not to protect our personal rights, but to chuck everything to the wind and not believe one more goddamn lie.

17 thoughts on “When Rights are Wrong”