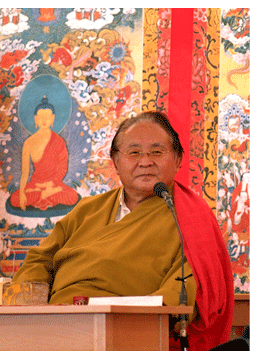 QUESTION: I have attended classes at Rigpa in London and have been to their retreat centre in France, but have now seen a video on youtube with a young woman who says Sogyal Rinpoche ordered her to undress and then sexually abused her. I was really shocked. The Rigpa statement (in reply) refuses to discuss the individual case and says they have full confidence in Sogyal Rinpoche, but that they take allegations of inappropriate behaviour seriously. I have asked in Rigpa if any of these allegations are true and am only told that Sogyal Rinpoche has never harmed anyone. No one will say if he has sex with students, or even if this is ever allowed, but it seems certain that he does. What should I think about this? I would really appreciate hearing from you as one of the earliest western Tibetan Buddhists.

ANSWER: I’m familiar with this video you saw, and have corresponded with several of the people who participated in it, though I have never been involved with Rigpa or met Sogyal. I’m in no position to directly verify the facts or falsify the stories.

By what universal law are insightful, inspiring, even brilliant teachers also paragons of ethical behaviour?

However, based on my experience of Tibetan monastic politics, and of community life under the guidance of a charismatic figure, I find the stories plausible and unsurprising. The nature of the guru-disciple relationship is ripe for abuse, and Westerners typically enter into those relationships with little or no training in self-reliance. Indeed, they’re often looking for an ‘enlightened master’ to take the burden of questioning off their shoulders. Some may find ways to enter into such relationships without compromising their own critical faculties, but they’re few and far between.

To suggest that abuse never happens because all spiritual teachers always behave impeccably is preposterous. It strains credulity and contradicts common sense. Also, by what universal law are insightful, inspiring, even brilliant teachers also paragons of ethical behaviour? Chögyam Trungpa comes to mind; there are others.

Rigpa’s statement is a classic manoeuvre of political sidestepping. Look at the argument: Sogyal has built a successful organization and is a good teacher, therefore … well, therefore what? Those who drafted the statement don’t actually deny the accusations. They simply refuse to entertain the possibility that he behaved badly because they, “have full confidence in the sincerity, authenticity and conduct of Sogyal Rinpoche.” I wonder whether they asked Sogyal to explain himself.

Their statement is an expression of faith, and it’s loaded. What’s at stake is not just the veracity of one particular assertion but the spiritual foundation of the spokespersons themselves. They’re in a personal conflict of interest. Were the allegations true, their own spiritual foundation would be shaken.

The final statement, that ‘allegations of inappropriate behaviour are taken very seriously by the organization,’ is as close as it gets to a disclaimer. It’s written in the passive voice beloved of evasive office-holders worldwide. No one’s taking responsibility for that statement. Besides, it’s a feint.

What it’s trying to evade is the crucial fact that Sogyal himself does not personally address the issue. Even if the allegations were untrue, his unwillingness to step up to the microphone is an abdication of leadership; it suggests a lack of integrity. It’s easy to be a great teacher by relying on the accumulated wisdom of a twenty-six hundred year old tradition, but to speak nakedly from the heart is a profoundly different and far more difficult thing to do, especially for those accustomed to adulation and unquestioned devotion. It is sad to see a teacher and author of this stature ducking behind a committee.

What you learned from him may still be deeply
meaningful and transformative, not because of
who he is but because of what you understood

Your question is, “What should I think about this?” I have told you what I think, but no one can really answer for you. Anyone who tells you what to believe should be held in deep suspicion. The very essence of the Buddha’s way is to develop self-reliance, and to hone our own judgement. How can we be sure we’re right? We often can’t. But that’s no reason to fabricate certainty.

After years in the Tibetan tradition I turned to the earliest teachings of Buddhism as embodied in the Pali Canon. I don’t for a moment think they’re a verbatim account of what went on during the Buddha’s lifetime, but I do consider them a rich and integral body of teachings, worthy of study and reflection. There is no mention of gurus or of devotion. The emphasis is on your own experience and an exploration of life itself, not theories about it. It is deeply liberating.

Tibetan Buddhism is sophisticated in every sense of the word. Whoever encounters it is marked for life. No matter what you end up thinking of Sogyal, what you learned from him may still be deeply meaningful and transformative, not because of who he is but because of what you understood. Whether we’re still in the tradition or have left, it’s a rich source of reflection and deserves thorough processing, not because it’s Tibetan but because it’s experience.

110 thoughts on “The Inconvenience of Doubt”