I was recently asked about the aloneness we subject ourselves to when we’re not content with the superficial pleasures of life, and strive for answers to life’s mystery. Here’s an abbreviated version of the question, along with my answer.

I was recently asked about the aloneness we subject ourselves to when we’re not content with the superficial pleasures of life, and strive for answers to life’s mystery. Here’s an abbreviated version of the question, along with my answer. 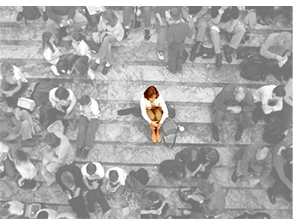 QUESTION: I’ve worked over the last seven years to become more attuned to myself, physically, emotionally and psychologically and I think after this time I know myself quite a bit better than I had done before. But it seems the more in touch with myself and how I operate I become, the less in tune I am with the world around me. I feel disconnected from the culture and general goings on of most people, who seem more preoccupied with celebrity culture, clothes, fashion, etc. And it’s not that I have no interest in these things, I do, it’s just that I know their place and they are not all-important to me. Is this normal, to feel you are an outsider once you take a step to reflect on life and question things, and begin to know yourself better? And do you have any advice about how to feel less lonely or isolated? Or is it just par for the course once you set out on this track?

What’s the point of facing something you can’t change?

You’ve put your finger on something faced by everyone who’s ever thought about life and acknowledged that it makes no obvious sense. Most people deal with this dilemma by hoping/pretending it’s not an issue. You can’t blame them. What’s the point of facing something you can’t change?

And then there are those of us who just can’t be satisfied with that. It sets us apart. We’re called strange; sometimes, we believe it ourselves. The natural reaction to feeling apart is to seek a place to belong. Shared belief systems provide moral support and ethical guidelines, but when they start answering unanswerable questions they cross a line and we lose confidence in them. That shows a healthy mind but doesn’t solve the existential dilemma.

The real contradiction is between the way we think we should be and the way we are. We find balance by being able to think logically while knowing life is not logical, a task that feels less strange when we keep reminding ourselves of life’s mystery. Still, as charming as that mystery can be in the stillness of a moonlit summer night, it can also take us into dark places. Trying to go with the ups and avoid the downs doesn’t work. Worse, it adds confusion to pain. Those who refuse to confront insoluble mysteries because, “there’s no point,” seem to us only half-awake. Meanwhile, to them we look mad.

When we gaze into the intimidating void of life’s
ultimate meaninglessness, we drop all pretense

Existential angst watches out for unrealistic expectations. It keeps us clear and wary.

The convenient answers of believers and proselytizers are as seductive as consumer or celebrity fads, and just as insubstantial. I labored with religion. I took up Buddhism hoping to find something transcendent. In the end, awakening was far more mundane than I thought: a simple, undistracted focus on the present moment.

Reflecting on that from this end of my life, it seems just right. When we gaze into the intimidating void of life’s ultimate meaninglessness, we drop all pretense. We’re left with few beliefs and few opinions, and that’s liberating in a way that can’t be described. There is nothing more wonderful than to breathe freely in all we do.

But gazing into the emptiness is one thing; trying to rationalize it is another; in fact it’s devastating. The human species dominates this world through its obsession with meaning and purpose, but we forget that all that is our own creation. Somehow, we expect our world to have its own definitions and its own answers, quite independently of us. It’s the ultimate projection.

It’s paradoxical too, for it unseats our self-reliance. Wanting meaning to reside outside of us leaves us fearful and risk-averse. We now think that life should be solid beneath our feet even though deep down we know perfectly well it’s not. Otherwise, why would we ever have invented religion and belief systems in the first place?

So let’s get back to breathing freely. Even in the emptiness of meaning you don’t have to be alone. You can breathe with others even if they don’t see as you see. That doesn’t mean liking them, just acknowledging that we’re all in the same boat. What really sets you apart is not that you see our commonality but that they they try to deny it, to escape in some imaginary boat that’s bigger and better. Loneliness and isolation come from the thought that everyone else belongs. Look into their eyes and you’ll see they’re just as afraid as you and me, only less clear about it.

You’ve always belonged, even if you haven’t felt accepted. Start by accepting yourself. When that seems difficult, remember: you’re not forever.

7 thoughts on “The Joys of Existential Angst”