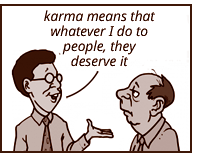 “It’s her own bad karma,” announced our seventeen-year old. She was talking about a fellow student who’d been dumped by her friends.

“Uh…what goes around comes around?”

“You mean, people get what they deserve?”

She looked suspiciously at her mother.

“I don’t believe in God.” She stated it emphatically, as always.

karma simply means cause and effect

Karma simply means cause and effect, but on top of that meaning we pile our own prejudices. It sounds perfectly sensible in English, doesn’t it? But the Sanskrit ‘karma’ never quite loses its mystique. Go figure.

We’re delighted that our daughter has no need to turn cause and effect into a belief system. Orthodox Buddhists and Hindus, as well as batty new-agers, tie themselves up in metaphysical knots over this straightforward idea.

Mahasi Sayadaw, the influential 20th century proponent of vipassana meditation, begins his Theory of Karma by suggesting that it’s “the cause of inequality,” and that it explains why people are born “blind, deaf, or deformed.”

This is weird, even repugnant.

He goes on to say, “No sensible person would think of attributing this unevenness, this inequality, and this diversity to blind chance or pure accident.”

It’s sketch logic. The justification for reincarnate karma is no different from that used to ‘prove’ God’s existence.

At the other end of the spectrum, karma’s bandied around these days to imply that there’s a divine plan. It doesn’t just represent the natural order; it goes on to suggest that this order is for our benefit. It’s straight out of the Bible. Hence: the universe is looking out for me; what goes around comes around; everything happens for a reason.

Well, everything does happen for some reason or another, but why should it revolve around me? That’s wishful thinking. A Facebook friend of mine recently received an unexpected $19 cheque in the mail shortly after losing $11 in cash. He called it karma, as if the two events were directly connected. However, we already have a word for remote coincidences like that: Luck.

As the basis of all science and the rationale for all change, the idea of cause and effect is useful. Our daughter’s schoolmate lost her friends because she was mean to them; in that case, it did revolve around her. By connecting the dots between what she did and what happened next, she might learn something.

That’s the higher purpose of mindfulness: an attempt to not just step back and accept change, but also to see it at work in our own minds.

what we really want is reassuring
explanations, even if they’re illusory 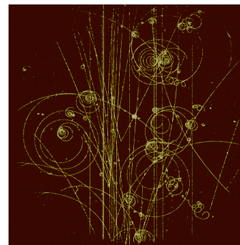 It’s not easy. Countless causes and conditions collide to produce a constant stream of effects, and those effects in turn become new streams of causes and conditions. We never get the whole picture any more than we notice each frame of a movie, though we can see patterns with more or less clarity, depending on how much mental space we create for ourselves.

Trouble is, we don’t always want to see clearly. What we really want is reassuring explanations, even if they’re illusory. We hang on for dear life to familiar patterns and predictable outcomes, even if they’re painful. To the extent that we feel familiar to ourselves we believe (or pretend) we’re safe. This habit is automaticity, momentum, karma. It’s how we stay in our comfort zone even when it hurts. The worst is when it reaches critical mass and, like a tidal wave, propels us involuntarily in directions we’d otherwise avoid. We’re carried along in the wake of our karma whether we pay attention or not.

to know your illusions and let them go doesn’t mean they
go away; it means you see them for what they are

When we face the relentless momentum of our own minds, we badly want it to stop. It’s understandable, but it’s not possible. Fortunately, it’s not the point. To know your illusions and let them go doesn’t mean they go away; it means you see them for what they are. We need them; we don’t need to believe in them.

The most paralyzing illusion is how we identify ourselves. When you need to believe in yourself as a Hindu/Buddhist devotee, or as ‘spiritual,’ you have to defend the notion of reincarnation, or to justify your belief in the benevolence of the universe. It seems reassuring, but it soon turns into a load of pointless rationalizations that only intensifies the inner chatter.

If, on the other hand, we dare to let go of ideas, opinions and illusions once they’ve served their temporary purpose, then we’re free to enjoy the glorious cinema of life.