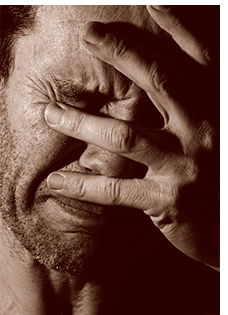 This was no time to argue metaphysics. Johanna and Stan, clients I’ve become fond of, lost their son unexpectedly over Christmas. Just when they thought he was recovering from a road accident, he took a turn for the worse. She described his decline in horrifying detail. “It was terrible,” she said. She wasn’t weak; she wasn’t tearful. She was defiant.

“No one should have to bury their child, Stephen.” She wished me a Happy New Year and hung up.

I was mute. What could I say? I have no more stomach for platitudes: “Resting in the arms of Jesus.” “Bound for the Buddhist Pure Lands.”

The pretense that we know what life’s about, and what follows, is for those who just can’t accept its treachery. Some people are compelled to say something — anything — even if it’s ineffectual, even if it’s make-believe. It’s supposed to help the bereaved, but I can’t see how. To be bereaved is to be inescapably face-to-face with loss. These one liners are for those who are not currently afflicted, a vain attempt to keep death at arm’s length.

Johanna’s mind is on something more immediate. “I can’t believe I’ll not speak to him any more.”

Of course, she does believe it. That’s where the pain is. She’s not denying the truth but voicing her disillusionment. She feels the urge to deny reality, but how can she? So she’s mad at God.

Why not? It’s her way of coping.

I found that I hadn’t been seeking security
after all, but freedom. Big difference.

Coping isn’t always so dignified. Our daughter once had a friend over for the afternoon and we met her mother. When Caroline mentioned that she had multiple sclerosis the woman exclaimed in her cheeriest voice, “Oh, I knew someone with MS. She died!” She laughed involuntarily. Caroline and I looked at each other. In her clumsy attempt to make things better, she made everyone feel worse.

People who face life’s sufferings simply don’t behave this way. They can’t; they’re in touch with reality. Idiocy is a trait of those who try to deny suffering and maintain their illusions about life’s intrinsic goodness. They’re somnolent, zoned out.

The pursuit of happiness may be natural, but the denial of suffering is dumb. My distrust of people who have all the answers turns quickly to anger, but that’s not entirely fair. After all, I’ve been there myself.

As a young man I had qualms about all systems of moral security, but out of insecurity I dared not trust my distrust. Alarmed by the thought that no one knows what life’s all about, I felt an emptiness in the pit of my stomach. I suspended my disbelief and gave the benefit of the doubt to one orthodoxy after another: Christianity, Communism, Buddhism. I wanted very badly to believe, so I did — at least, I tried to.

That’s another story, but eventually I was sorely disillusioned and had to understand why. The result was my memoir, The Novice. In writing it I realized that I hadn’t been after security at all, but freedom. Big difference.

As I approach old age my doubts diminish. Nobody has a handle on everything; everybody has their insecurities; few people admit either of those things. I’ve figured out a few things, but no longer fear what I haven’t.

Life can be good, but it also hurts like hell, and it ends. Pretending otherwise makes me dumb and insensitive. So if I’m silent in the face of Johanna’s agony, I know at least that my honesty frees me from pretentious, patronizing and ultimately harmful illusions.