A book by by Ken McLeod 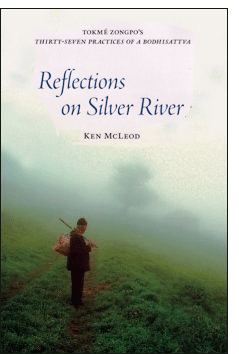 I am nowadays reluctant to open the pages of traditional Tibetan teachings. They ring with superlatives, and talk too easily of perfection and wonders. Ken McLeod’s translation and commentary on the thirty-seven practices of the bodhisattva does none of that. His writing is raw, a plain example of how to negotiate life with dignity rather than pride, with questions rather than answers, with humanity rather than sainthood. He demonstrates the fragility of self-knowledge and the grace of striving in the face of emptiness and death.

Many have been drawn to the ‘esoteric’ teachings of Tibetan Buddhism. Doctrines and practices are handed down by secret initiation among an exclusive class. There are dire warnings. It’s exciting, but intimidating. What happens if you don’t get it right?

At the other end of the Buddhist scale lie the teachings of a man who walked the roads of North India at about the same time literature was being invented in Greece. He questioned life itself, not as a concept but as a painful experience. His way diverged from the philosophers, soothsayers and religious teachers of his time. Rather than perfecting practices and following rules, the Buddha exemplified the way of self-knowledge.

In this book by a lifelong Buddhist practitioner we are not instructed on what is correct. No secret knowledge is revealed. Instead, the author exposes his fears, doubts and qualms. He uses his own disappointments and pain to explore the cryptic, ambiguous verses of the fourteenth century Tibetan monk Tokmé Zongpo.

This book offers glimpses of a very human Togmé Zongpo, not the holy Tibetan lama who never made a misstep. I relate to it personally, a little differently each time I pick it up. Once you’re familiar with the contents, you’ll go back to select each chapter like an old friend, just the one you need to consult on a particular life problem, who will not tell you what to do, but what is possible.

This lovely, heartfelt testament is not just a book; it’s a companion.