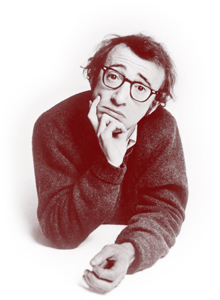 Woody Allen is at the peak of his powers. His movie Blue Jasmine is well told, brilliantly acted and tightly edited, but I hated watching it. It didn’t just make me squirm. I felt he was trying to douse my every hope.

Every generation has its myths, and the one that’s dragging us into the future right now is the notion that we can live without myth. Jasmine (Cate Blanchett) and the other main characters, wealthy and poor alike, dance like puppets on the strings of a faceless god. Flashes of clumsy mirth bring momentary respite from their otherwise sordid existence. Their lives are unenviable.

This is Dr. Phil territory. Even Buddhists would concede his Life Law #6: “There is no reality, only perception.” Allen portrays this insight skillfully, but where Dr. Phil and the Buddhists think we can do better, Allen’s subtext is that we’re a sorry lot with no chance of redemption. The only light shines in a dark workshop where Jasmine’s stepson Danny, a minor character, obstinately nurses his integrity. Allen used to cloak his pessimism in neurotic comedy, but there are few laughs here, and they are cruel.

A life without effort or direction is empty. On that I’m with Allen, but I’ve always been ambivalent about his work. Although he flaunts the conventional rules of success and still succeeds — something I admire — the underlying premise is bleak.

Not that I’m some sort of Disney freak. I abhor gratuitous happiness and false positive thinking. I have serious doubts about progress, though with perseverance and luck it can happen. I know we can change the perceptions that form our reality. However, the conventional majority hardly imagine it while the new-age minority reframe those perceptions as if they’re just semantics; as in, “It’s all good.”

Our attempt to escape our own perceptions by obscuring them with denial and lies is both understandable and unforgivable. Jasmine is a caricature of this essential human malaise. Allen’s depiction of that is brilliant.

However, this film holds no glimmer of hope. Whether you call it redemption, enlightenment or self-improvement, Allen has either given up on it or has pointedly omitted it. He has uncanny insight into human nature, but seems depressed by it.

It’s rare that we improve our plight, but not impossible. I learned that as a Buddhist monk (see my memoir), but experienced it only years later. In that no-man’s land between hope and discovery I couldn’t shake off the perception of being an island unto myself. That’s where Jasmine is stuck. Like her, I brooked no compromise. I felt viscerally that to seek support was a weakness; so much so that I abandoned even the fragile consolations of belief. It wasn’t irrational, but it was painful. I lost myself once again to the isolation that had chased me into monastic community in the first place. Only when I finally met someone of like mind did I understand the meaning and purpose of moral support: that it could take me out of myself. By reconnecting to the chaotic imperfections of society, I perceived myself as something else, less exalted and more likable.

Who among us has never balked at the terrors of intelligence?

Jasmine flaps around like a marooned fish, hanging on grimly to the made-up certainty of who she is. She pays the ultimate price — not her life but her sanity. She can’t bring herself to reach out humbly to another human being, even when she has the perfect opportunity. That alone would open her to the possibility of change, but she won’t let go her pride; she just can’t. It’s her only, desperate, paper-thin identity. Her perception — her reality — is that to abandon her self image is to break the prime rule of survival. It’s inconceivable.

Jasmine is a model of willful ignorance, and who among us has never balked at the terrors of intelligence? Because tragedy is so human, Woody Allen is lauded for his depiction of reality. For his communicative and technical skills he deserves it.

But this is a heartless, dismal and cynically one-sided perception. Yes, life is often like that. No, it’s not inevitable.

18 thoughts on “No Reality, Just Perception”