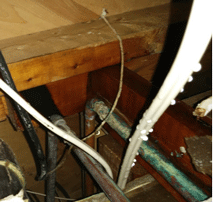 I noticed a damp patch on the basement floor last night. I’ve seen it before, and it always signalled leaky pipes. I looked around for a less troublesome explanation and remembered that Faith’s punching bag was anchored by a large sealed container of water. "Must be leaking," I thought. I shifted it, so that in the morning I’d see that the damp patch had moved too. I’d just have to find a way to empty the container.

Next morning, as you might expect, the damp patch hadn’t moved with the punching bag. Instead, it had grown damper. In fact, the floor was squelchy.

“So this is what enlightenment feels like,” I thought.

I knew perfectly well where all this was leading. I just didn’t want to go there. I decided that a small pipe in the adjacent wall must have sprung a leak after all. Our handyman William would make a surgical incision in the gyprock and solder the break. He’d done it before just a few months ago, and again a couple of months before that too. I was careful not to join the dots and come to the more realistic conclusion. That would be inconvenient.

By the time William arrived, a large bubble had appeared in the ceiling. A gentle prod, and it quivered. William joked that it was a water balloon ready to burst. I wasn’t amused.

William took to the wall and ceiling with a vengeance, and within minutes the basement steps and floor were a sodden mess. "There it is," he pointed to hot water spouting from a tight joist of structural beams. The pipes were tightly wedged and green with corrosion, the woodwork dark with water.

Having found the leak we could now turn off the main tap that connects the house to the city water supply. It’s on the other side of the basement. As soon as I touched it, however, I felt water. As I turned it trickled over my hand. Then I realized my feet were wet. I was standing in a puddle. If I couldn’t turn off that tap, the house was going to get wetter and wetter.

For several minutes I tried to convince myself that this was the same puddle as the hot-water leak, on the other side of the basement, but neither the water nor my denial could reach that far.

William said, "I can’t fix that. You need a plumber."

"To replace your plumbing."

"It’s finished. Forty years is its natural lifespan. How old’s the house?"

This was going to disrupt my week and cost thousands. All my determination that this problem would be trivial evaporated like mist. In that moment the scales fell from my eyes. My denial was defeated. I awoke to the reality of our plumbing system.

"So this is what enlightenment feels like," I thought. I knew it was ineffable. I just never thought it would suck.

4 thoughts on “Down in the Flood”