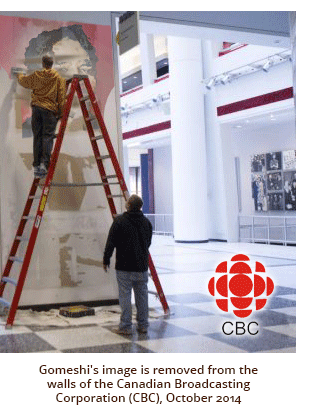 Jian Ghomeshi was, until a few weeks ago, one of the CBC’s most successful personalities. His fall shocked his audience more than his colleagues. Apparently, it was long overdue. For years he’d manipulated his personal and professional acquaintances with all the narcissism of a bad guru.

The crucial question here is not what happened or how creepy it is, but how it is that people buy into it. Gomeshi lorded over his staff, and they allowed it. The victims of his assaults chose to remain silent.

This susceptibility crops up wherever there’s a power or celebrity imbalance. It happens in business and religion, politics and science. I found it in Tibetan Buddhism and it’s still there. When Westerners convert to Asian religions and accept the norms of communities they’re not really wired for, we say, ‘Well they’re strange anyway.’ This completely misses the point.

Rather than rock the boat, the socialized instinct is to
look around at what others are doing and fall in step

It’s not about celebrity or religion or weirdness. It’s about the human need to fit in, and its flip side—the fear of sticking out. Once we’ve found and secured a place for ourselves in a group or a corporation, we align our perceptions to that social environment. Sometimes it’s called hypocrisy; usually it’s not called anything because everyone does it.

In this case at last, one person finally broke the silence. She could have been sidelined, silenced or worse, but fortunately she wasn’t. Because of this, others were then free to come out without sticking out.

The social contract is not simply thrust on us; we shape it too. We follow the rules more or less, but we must also be ourselves. It’s a responsibility. It requires us to explore our intelligence, take risks, learn from failure and keep growing up.

Motivated by the fear of being wrong,
humans give up the freedom to be wrong

In Buddhist communities, and as we now see at the CBC too, this responsibility is taken lightly. In the name of peace, full-grown men and women give up their critical voice in public and private; sometimes even in their own head. They pretend ignorance and hope it will be blissful, but it isn’t. Rather than rock the boat, the socialized instinct is to look around at what others are doing and fall in step.

To be yourself means to resist such complicity. As simple as it sounds to be yourself, it’s not. We all understand that. Still, you’re who you are not only by genetic accident but also through your own decisions. People forget that. They think their beliefs are who they are. Beliefs are hardly worth the paper they’re written on. All that counts is how you behave.

The behavior of Jian Ghomeshi speaks for itself, as does that of his colleagues. With the freedom to choose comes the responsibility to do it with integrity.

Motivated by the fear of being wrong, humans give up the freedom to be wrong. It’s hardly what you expect from the creative centre of the Canadian arts scene. A group of CBC professionals—presumably educated, liberal and secular—allowed Gomeshi to trample their rights and mistreat them for years. They accepted a sick working environment that hurt people. They were irresponsible.

The greater tragedy is that so many people are afraid to live their own lives. We all need to fit into one or more communities, but we must also be able to step back for a hard look; and we must always denounce bad gurus, no matter the cost. In this case, as in so many others, the community itself was the force of silence.