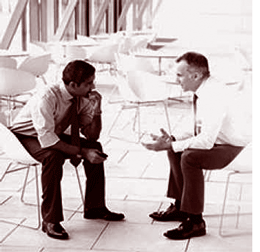 I was talking to a friend this week about my upcoming workshop on relationships. He went silent for a moment, looked me in the eye, and asked, “What the f*** do you know about relationships?” He didn’t stick around for an answer, but I thought it was a good question anyway.

The full question is: How (the hell) has my training as a Buddhist monk and a lifetime of mindfulness meditation improved my relationships?

If you think of meditation as just a way to clue out, it’s hard to see how it can help anything. Mindfulness meditation, however, is anything but. Rather than trying to escape the ickyness of difficult relationships, the goal is to listen and learn. The twist is that we’re listening not just to the other person, but also to ourselves. It’s not uncommon for our inner dialogue to say one thing and our behavior to say another.

Two people shouting at each other hear nothing

The most complicated thing we do in life is to interact with people. To create good business relationships, make friends and be loved we need to suppress knee-jerk reactions in order to establish trust and avoid trouble. We also need to be honest and not fake. We practice this and get better at this balancing act, but it’s an ongoing process; we never get it perfect.

Sometimes it’s hard to be entirely honest about underlying feelings even with ourselves. We have the ability to put a face on anything, and tend to use it as a matter of convenience. That’s when relationships grow strained. The way my friend spoke to me the other day upset and baffled me. I tried to answer his question literally, to explain what I’d learned about relationships, but he only became more incredulous. If I’d been listening to myself I would have realized that I was being defensive. If I’d really been listening to him I would have realized that the question had nothing to do with what I know or don’t know. It wasn’t even really a question. He was expressing a frustration or bias of his own.

The ability to separate our reactivity from our thoughts can be bad, but it can also be good

There’s so much nonsense spoken about forming perfect relationships, finding your soul mate and exercising power over others. However, the very existence of that conversation means it’s an issue.

Two people shouting at each other hear nothing. It’s a pointless exercise, yet some people don’t just do it sometimes, they do it routinely with colleagues, friends and family. All relationships take on habitual patterns; sometimes those patterns are dysfunctional, even toxic. Returning again and again to conflicted relationships and strained silence is a strange comfort zone that no other animal on the planet would likely put up with. We humans are a strange lot.

That strangeness lies in the ability to separate our reactivity from our thoughts. It can be bad, but it can also be good. We can modify our behavior, though whether get it right or not depends on the role models we grew up with, the effort we put into improving ourselves and the wisdom we bring to it. Mindfulness meditation is a threefold approach to behavior modification, using ethics, intelligence and concentration. The goal is to become less reactive and to act more thoughtfully. That’s not just good for relationships, it opens up an entirely new way of relating to ourselves and to life.