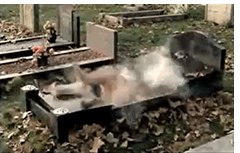 I watched a strange video clip on YouTube the other day. A woman in childbirth gave one last push and her baby flew out of her like a cannonball, soaring through the air screaming and aging as he arched over the Earth’s surface. He reached his apogee already balding and middle-aged, then plummeted downwards, crashing with an ignominious thud into his eternal grave. With that, the video was done. The poor sod had barely enough time to savour his breath before it was all over.

I watched horrified, wondering why we have to keep reminding ourselves that life is short. Isn’t it obvious?

In the battle between head and heart, logic is no match for emotion

Perhaps, but we have a remarkable tendency to ignore the fact. When any particular transition proves too scary or unbearable, we have an innate ability to deny it with all our heart. It seems to get us off the hook, but that turns out to be an illusion. Sooner or later we find ourselves still hanging there, swaying between indecision and procrastination.

The only way to move forward is to regard our unwanted dilemma as an opportunity, not a tragedy. Like life’s brevity it’s obvious when we think about it, but just thinking doesn’t change much. In the battle between head and heart, logic is no match for emotion.

Turning to face unpleasant changes in life takes determination and a steady hand. That used to be the domain of prayer. It still is for a faithful few, but for most of us that contemplative option is no longer on the table.

The secular alternative is meditation. This is tougher than faith in the Almighty. It takes faith in yourself. Blind faith of course is just arrogance, but if we learn to trust our ability to learn from our mistakes we can conquer change, or at least not be victims of it.

Chanting mantras and visualising peaceful scenes might be calming, but they’re not real meditation

What overcomes the emotional resistance of denial is emotional intelligence, and the only way to earn that is by falling flat on our faces. Logic doesn’t really help.

However, just making mistakes isn’t enough. We have to learn from them too. Meditation gives us space to reflect on and strength to face those things we’re inclined to deny. It’s a gentle but powerful tool that makes us healthier and, in the long run, happier too. However, it’s not magic. Chanting mantras and visualising peaceful scenes might be calming, but they’re not real meditation until they confront us with our own resistance to change.

Leaving home, struggling to survive, making friends, losing them and eventually losing ourselves are all normal consequences of living, but we literally wake up each morning hoping things won’t come to that. It’s an utterly illogical survival reflex. It puts our worst fears on the back burner and enables us to deal with daily necessities, but as a long-term strategy it’s disastrous.

Both life’s transitions and our resistance to them are practical realities. When we bring a practical approach to them we experience serious growth spurts at any age. We may think we’re all grown up, but we really keep growing right up to the moment of that ignominious thud. Until then, there’s no time to lose.