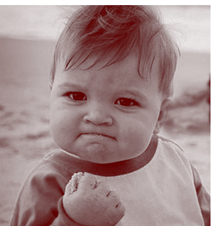 The whole reason I started meditating was to control my temper. I’d been warned by parents and teachers, and paid for it in detentions, canings and the disdain of my family.

Unfortunately, meditation didn’t help the way I thought it would. People say that if you breathe quietly in an empty room for long enough, your mind will grow calm and your passions will fade away; but people are wrong. For a start, emotions are a normal, healthy function of the human mind. You can’t stop them and still be conscious any more than you can stop breathing and still be alive. Secondly, although meditation may slow down your mind, that’s just a prelude; it’s not the goal.

I practiced mindful reflection, and bit by bit, it revealed my mind and its workings. That changed my self-image. It helped me accept my anger, which was the last thing I expected. I wanted to eliminate it, not befriend it.

Until then, angry was who I was. I was ‘known’ as an angry person. It never occurred to me that I was angry for a reason. The evidence was plain. I’d periodically erupt, biting off the heads of whoever was at hand. There was collateral damage.

Mindful reflection taught me that I wasn’t angry so much as disappointed. It was an aha moment that separated honest passion from nervous baggage. Those who said I was an angry person weren’t trying to help me; they were trying to deny their role in my anger. I was angry at my teachers because they were authoritarian, brooked no disagreement and pretended to know everything. I was angry at my family because they made me the scapegoat. I was angry for good reason.

When I realised that my real problem wasn’t anger but frustration, not just resentment but disappointment, I began to see how my reactions had taken on a life of their own. They’d become subconscious, but now rose to the surface where I could disentangle and begin to let them go.

Anger doesn’t stop, and nor should it. It’s a necessary survival mechanism. I get mad at the daily news, the murder of innocents and the brutality of human beings. I get angry when people are disrespectful. I get angry at myself. By understanding that anger, I can express it without being rash—without the collateral damage. I can make my point, gain respect and, if I’m wrong, still find the courage to apologise. Mindful reflection hasn’t made me a paragon of peace, but it has put me in touch with all my passions—not just anger.

Don’t underestimate the power of meditation, and don’t trust popular preconceptions of what it is. It doesn’t mean tying yourself up in unnatural postures and sitting in agonizing silence for hours on end. It just means looking into your own mind and judging for yourself what you find. When you practice it yourself, you see into the peculiarities of your own behaviour, and discover the wisdom that’s available to us all, whenever we take the time to look.