At the core of Buddhist philosophy lies the misunderstood and maligned term śūnyatā. It comes from the Sanskrit root śūnya: nothing, zero, and is usually translated as emptiness. 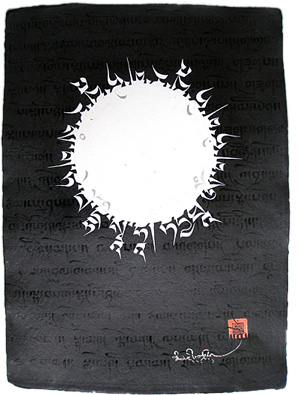 The term does not refer to emptying the mind or a nihilistic view of life. Rather, it describes something that we believe to exist, which doesn’t. Contemplation of emptiness dispels the illusion of inherent existence. It was mentioned by the historical Buddha in the Suñña Sutta, and expounded in greater detail by Nāgārjuna, known as the Second Buddha and founder of the Mādhyamaka school of Mahāyāna Buddhism.

It’s normally presented as pure philosophy, and is quite dry. However, dwelling on it has a way of radically transforming the way you see things — everything.

There are two levels of investigation in Madhyamika: ultimate & conventional. When seeking the ultimate nature of self or of phenomena, one finds nothing. All lack inherent existence and are empty (śūnya).

However, even children know that they can refer to selves and things and others will understand. This involves naming and referring, so their existence is said to be conventional. In addition, we’re also able to imagine things that don’t exist — such as a rabbit’s horn or an inherently existent self.

So although nothing whatsoever exists ultimately, conventionally speaking some things (horns) do exist while others (rabbit’s horns) do not. We call these respectively ‘real’ and ‘imagined.’ These are categories not of a unique oriental philosophy but of everyday language — conventions.

Now, things unafflictedly perceived by the five bodily senses are real; they are known directly in real time. Things recalled or imagined conceptually, however, are perceived indirectly — via a mental image. They don’t need to be present. Mental images may represent anything, real or imaginary. It’s possible to imagine a rabbit’s horn because the mental image is real; it is the object of a valid consciousness. The rabbit’s horn, however, is not real.

A mental image is an abstraction which, by standing in for another object, enables us refer to it whether it’s there or not. It enables us to think, speculate, create, imagine, dissemble, confuse and delude. It is ethically neutral. The conceptual mind that clings to an inherently existent self, however, self-defensively rationalizes and believes all that it imagines. Relinquishing ego-grasping is the whole task of Buddhist practice and mindful reflection.