The Art of Mindful Reflection

Unlike orthodox Buddhist manuals, which recite long lists of technical topics and use English in unfamilar ways, this guide to Mindful Reflection™ speaks to you personally and in everyday language. But there’s more to it than just words. The text and images help lead you into a meditative state by slowing your senses, enabling you to savor a few words at a time and establishing the space you need for maximum mental clarity. Despite its simple structure, It Begins with Silence is systematically built from classical Buddhist themes.

The appendix maps the elements of the Buddha’s teachings against the contents, showing how the ten chapters encompass everything he taught.

The introduction describes my personal understanding of a) the Buddha and, b) the institution called Buddhism. My purpose is to give you some perspective on exactly what you’re trying to do with Mindful Reflection, and what you can hope to achieve. It includes a straightforward introduction to the basic practice of mindfulness and also introduces you to the essentials of reflection. The Buddha didn’t mean you to just sit quietly and concentrate, but also how to think about and engage with life:

“…misguided people learn the Dhamma but … do not examine the meaning of those teachings with intelligence, they do not gain a reflective acceptance of them.” [The Buddha: Alagaddûpama Sutta]

The book consists of ten chapters. Each one is prefaced by a story. The contents are encapsulated in five brief verses and elaborated at length in the main text. You might read a chapter in one sitting, or just a few phrases. It’s up to you. The point is to dwell on the meaning of these thoughts. They’re not mine, but handed down and transposed over the centuries via my teachers, who each traced their lineage back to the Buddha himself.

The book is illustrated with beautiful color and monochrome pictures to set the tone and prepare your mind for the task at hand. It Begins with Silence is not just an informative book about an ancient religion; it’s a hands-on guide to changing your mind and life. 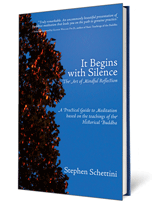 “This is a truly remarkable, rare find. Schettini has struggled like an alchemist in his lonely lab to distil the teachings of the historical Buddha into these ten deceptively simple stories, verses and explanations in an uncommonly beautiful presentation of Buddhist meditation. In warm, heartfelt and personal language Schettini leads you on the path to genuine practice. It begins with silence; it ends in stopping. Along the way, you’ll traverse landscapes of inner chatter, gaze upon sky-like vistas and penetrate the intimate but elusive realities of the inner life.” —Glenn Wallis, Ph.D. Author of The Basic Teachings of the Buddha

“Like sunlight penetrating water, this nourishing and beautiful book presents the Buddha’s teachings with great lucidity. It evokes the healing promise of mindful reflection with unwavering integrity, and leaves me with more hope for us all than Freud and his successors ever suggested. Schettini’s insights into the human mind and heart have helped me enormously in navigating the difficult terrains of the client-patient relationship and the psychotherapeutic journey. It Begins With Silence deserves the close attention of all those interested in the nature of the mind.” Jonathan D. Keeley, Ph.D. (C.Psych.) Clinical, Consulting and supervising psychologist The Montreal General Hospital, McGill University Health Centre Staff psychologist, Mcgill University Mental Health Services

“This method of presenting a verse and then commenting on it is a classic way of elucidating philosophical argument. Schettini has learned his lessons well from the masters and is here developing his own technique of sharing knowledge. His text is fluid and beautifully ordered. This book is a valuable introduction to the art of meditation/mindful reflection. Schettini emphasizes that the purpose of the practice is ‘to identify the cause of stress and uproot it through the practice of mindful reflection.’ Schettini’s text is designed to promote curiosity and deep reflection. A serious reader will get much out of it to aid on the path to understanding Buddhism’s teachings without getting bogged down in institutionalism. Schettini is striving for individual comprehension and to provoke thought. He insists on the term ‘Mindful Reflection’ as the key to de-stressing as a way of life. This is a highly interesting self-help book that starts any adept on the path to meditation. Schettini is to be congratulated on his conception of this gorgeous text.” Mary Hannah The Sunday Observer May 29, 2011

The historical Buddha was not, in any sense of the English word, a religious man. In fact, he was quite the iconoclast. Along with his public and family responsibilities, the young Siddhattha abandoned his Sakya clan and a considerable inheritance to wander off barefoot and study with some of the most renowned meditation teachers of his day. Just six years later he declared them without exception to be deficient, and himself to have achieved a breakthrough surpassing them all. He described this, among other things, as full, irreversible awakening, ‘sublime and perfect.’ I’ve often wondered, if he were alive today, what the media would make of him. ‘Arrogant’ is one of the gentler words that comes to mind. 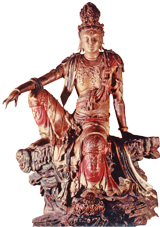 If you’re surprised by this description of the World Honoured One, it’s because he was followed by a long line of reverent publicists. Twenty-six centuries-worth of men and women (mostly men) created the legend and folklore, monasteries and rituals, tenets and philosophies, religions and sects, rules of conduct and, yes, iconic imagery that we today call Buddhism. They both preserved his words and embellished them in ways that are sophisticated and at times confusing. The Buddha taught an introspective way to unconditioned happiness. He used the dialectic techniques of philosophy and the terminology of his samana teachers, but to call him a philosopher or religious leader is to miss the point, for what he proclaimed was an ‘end to views.’ Buddhism was imported into more than a dozen Asian cultures, each of which drew on its own preferred scriptures, rituals and styles of meditation. I was trained as a monk in Tibetan Buddhism, Gelukpa school, according to the textbooks of Sera Monastery, Jey College. There I was reminded of my great good fortune, for my fellow monks declared their take on Buddhism, half-jokingly, to be ‘the best.’ I think I quite disappointed them with my lack of competitive spirit. 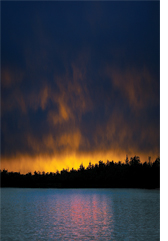 After eight years of study, I felt increasingly that I was living in an ivory tower. With no little trepidation, I left behind my robes, teachers and friends and set out to learn what I could and couldn’t do with the teachings in ‘normal’ life. For twenty years I struggled alone to make sense of what I’d learned. Along the way I acquired rudimentary skills in writing and typographic design. When I was eventually asked to teach, I realised I’d been preparing to do so since the day I walked out on the imaginary certainties of membership in an august tradition, and that I finally had the tools I needed. The subject was clear enough – what the Buddha had taught. How to convey it was more challenging. My Gelukpa teachers had been scholars and debaters of the highest calibre, trained in logic and epistemology and expressing themselves in a dialectic designed to withstand the most rigorous onslaught. Most renditions of these teachings into Western languages are densely academic, while popular explanations often go to the other extreme, diluted with new-age hyperbole and obscuring the profoundly practical message. These teachings are not just meditative techniques to calm you down. They’re a lifelong commitment to uprooting stress and strengthening emotional intelligence. 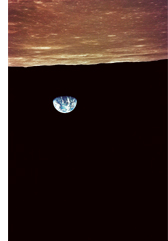 I wanted to teach in plain English, using stories not as parables but as examples of what these ancient teachings have to do with real life. I also wanted to be true to what I’d learned and frank about my own experiences. I was willing to take the sort of risks that were frowned upon in my former life as a scholar-monk. This is the result – a highly subjective and quite personal transmission.